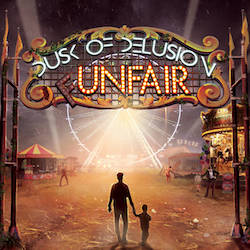 "What the hell is Neo-Metal?" I asked myself, as I read about French metal act, Dusk of Delusion. That is what they described their music, it said. There is so many influences shooting though this album from Machine Head and parts of Pantera to a Korn styled Nu-Metal groove as well.  I have heard of Neo-Classical Metal and stuff… but this was a new one.

Formed in France 2016, they set out to do things differently right from the start - and judging by their first full album… boldly and daringly they made as a full concept album right off the bat and set the story in a wildly warped carnival. That takes some seriously large balls to do right off. Props to them.

Right off the bat, the drums and bass slap you in the face, complementing one another and creating a wall of melodic rhythms that pounds your very soul. The guitars sound so damn good but are set rather low and buried in the mix… but it is the vocals who are set even more back and muddied as hell, and completely gets lost across the album. If this was on purpose, this was a very wrong choice to make. This makes it a very hard album to listen too, even though the band seems to be kicking some major ass.

I hope that Dusk of Delusion changes these flaws on the next album. I hear enough of the album to want to see what a second recording would bring while hoping that this was just a young band led by a rather uninspired producer/engineer and these things can be fixed. Guess we will see… as for this one - a tragic rating for a band that seems to be so much more.