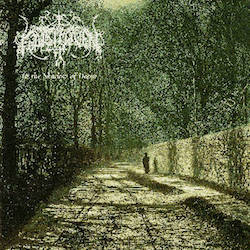 Black/doom metal played within the thin shadow of stoner/doom and fused with a poignant atmosphere has gifted In the Shadow of Doom by Norway’s Faustcoven. A noteworthy release by a band that emphasizes quality over quantity in an age where many bands feel the need to dispose a new lackluster purposeless album every 2 years or less unto the masses. Drawing much inspiration from horror stories/movies and Satanism, In the Shadow of Doom is a spellbinding endeavor that is well within the realms of superb quality both instrumentally and vocally. At first glance of the album’s artwork, I had made the presumption that Faustcoven played “dsbm”, a sub genre I loathe passionately; however upon researching the bands lyrical themes and album history on The Metal Archives and in addition listening to the material, I was elated to discover that Faustcoven was no such band. Having released only 4 full length albums since 2003, I found myself slowly garnering much interest in Faustcoven as they seem to share one ideology in common with me, that is, music requires a significant deal of time to weave its way into a state where the listener develops a yearning in between releases. It has to have the supporting factor of time in order to build interest, attraction and mystery. If too much is given ever so often then irrelevance will quickly cling to the music like a tick on a cow.

In the Shadow of Doom is has a very unique feeling and sound. The guitars range between a mix of mid-tempoed and high played notes, the drumming is soft and steady yet satisfactory paced, the vocals are a blend of growls and highly enunciated gasps. All this on a fairly raw sounding production, not omitting the marvelous song writing, catchy verse+instrumentation combos and all together coherent compositions sum up a formidable undercurrent. You can hear the effort put into the creation of every track to ensure it lives up to the expected band’s standard and to ensure memorability by the listener/s. The task of creating a follow up album that either matches the output or excels that of the past had to have been at least onerous. The result is an auspicious release, one that echoes the band’s ability to give a clear representation of their musical competencies. Songs such as “The Devil’s Share” and “Yet He Walks” have a very story-esque caress, and wastes no time in drawing the listener into its space via the appeal of the cumulative product. There is discipline exhibited where the use of speed is concerned; though being primarily doom driven, there are instances of uptempoed segments that purvey consistent polarity in matching the essence of what is being played throughout In the Shadow of Doom. The guitars and vocals help to coat the music with a very sordid sensation, as though not gloomy enough.

The production seems to focus on the audibility of the vocals and guitars. The bass can barely be heard thus making the music sound very strident. Nuclear War Now! Productions has some of the best bands in the underground metal scene, Faustcoven is surely one that deserves to be placed amongst the rock-ribbed existing on NWN! In the Shadow of Doom has warranted much esteem therefore exerting Faustcoven as a cogent musical entity.

Favorite tracks:
“The Wicked Dead”
“The Devil’s Share”
“Yet He Walks”
“Sign of Satanic Victory”
“Marching in the Shadow”
“As White As She Was Pale”
“Quis Est Iste Qui Venit”