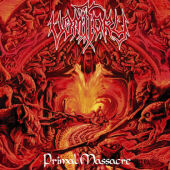 I remember that I was disappointed after the first Primal Massacre listening sessions. From my point of view, Vomitory had created three of the best death metal albums of all times. Both Redemption and Revelation Nausea had triggered gargantuan blasts – and Blood Rapture even topped those masterpieces. Due to this background and in view of the fact that stylistic modifications were simply unimaginable, I thought Primal Massacre would be the next apocalyptic weapon.

On the one hand, it’s still a mystery to me why I do not like the album as much as its predecessors. Indeed, Vomitory deliver more of the same without any compositional experiment – and that’s actually a good thing. The output sounds energetic, the production is on an equal footing with those of the album’s predecessors and the authenticity of the band is beyond doubt. On the other hand, my disappointment (that I still feel, even 16 years after the release of Primal Massacre) is easy to explain. I miss outstanding songs that are able to challenge the excellent detonations of the former albums. The first, the last and only track that comes near to classics such as 'Under Clouds of Blood' or 'Eternity Appears' is 'Retaliation'. It shines with a great flow which is based on a simple, easily comprehensible riff and a profound “melody” during the mid-part. A minimum of tempo shifts ensures a dynamic appearance. A great song, but it fills less than three minutes of the album.

Music is a matter of taste. Sorry for this empty phrase. I just fall back on it in order to underline: the general frame of Primal Massacre does not differ from the previous works of the Swedes. You have some blast beats attacks, ultra-heavy mid-tempo sequences, raw, pretty low-tuned guitars, guttural, deep vocals and any other death metal aesthetics you love to experience. Everything is based on the strong, powerful and dense production – as mentioned above, in technical terms Primal Massacre does not need to fear any comparison. The mix can be described with the title of the above-average closer; the album appears as the soundtrack of a 'Chainsaw Surgery'. Its high degree of vehemence conveys the typical intensity of extreme metal – nonetheless, the quality of the riffs is good, but not unmatchable. Moreover, tracks like 'Eternity Appears' had proven evidence that it is possible to combine even wildest death metal with a catchy touch that highlighted single parts. Here the listener is buried by a wave of violence that mainly destroys the sight on individual aspects. It took some time until I realized the nice morbidity of the slow part of 'Gore Apocalypse'.

Well, time to stop grumbling. The fifth work of Vomitory presents songs that show the pure essence of the deadly subgenre without suffering from severe mistakes. It stands in the shadow of the previous outputs, but in its own right, it’s an album worth listening and it reflects the band’s unbroken joy of playing. I just regret that Vomitory began to make their monument crumble by releasing these songs.