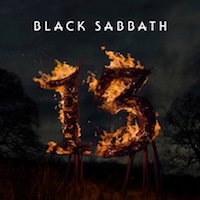 This review is one of the pinnacles of writing career. This is the very band that brought me here today to write for you lovely folks, and I’ll be honest I didn’t expect very much all at all. To see a band you worship offer up something that might otherwise be subpar is always frightening. We never want to see our idols fall from the often self-serving personal graces we afford them.

Folks, I can’t accurately tell you how happy I am to have been wrong in assuming that this 13 record might not be worth hearing.

To do a review of this nature is always a tough undertaking; putting aside personal hopes and histories is always a challenge. That said, Black Sabbath does what is expected of them: they issued a CD that is both historically relevant and a modern piece of heavy metal intensity so good it should shut up all the detractors, of which I was, stupidly, one. The first track “End of the Beginning” has such an insane Sabbath bloody Sabbath-meets-Black Sabbath tone to it, it’s just sickening. At the end I loved hearing a “Looking for Today” sound written all over it. Without completely copping the original sound so as to mask a lack of ideas, Tony Iommi simply pulls some musical artifacts from that brilliant mental arsenal he harbors and applies them in generous but sparing amounts. Of course we probably all heard the powerful “God is Dead” track released beforehand, and it was a pleasant surprise indeed, but “Loner” seems to call upon the Heaven and Hell era in terms of overall tone. I love that this record calls upon the sounds that made Black Sabbath famous without relying solely on past glories to guide them through this release. These gentlemen know full well by now what to do and how to do it.

Now, as for Ozzy Osbourne’s vocal duties, I’m sure there’s quite a fine amount of studio magic helping him through the recording, and that’s expected at 64-years old, but his dark, slow, even brooding vocal fits the exact sound Rick Rubin was going for as producer. Rubin stated he was going to draw out the Sabbath of old and damned if he didn’t do just that. Geezer Butler sounds as heavy and thunderous as he has, oh, every step of his illustrious career with no stultification in sight. That booming underside that has influenced nearly every metal band over the last five decades never gets old, and as a bassist myself I’m thankful for that.

Another point of wild contention was the lack of Bill Ward on the drums in favor of Rage Against the Machine’s Brad Wilk. Wilk does a fine job and doesn’t miss a single step when driving these masters forward with some seriously destructive skin bashing. His nice ride in “Live Forever” is as competent as anything on past albums. Yes, it’s difficult to get past the fact that this lineup is, factually, incomplete in terms of “reunion”, but putting aside egregious wants and allowing change to be a positive rather than a negative will help us all enjoy the album much more along the way. I think a lot of people figured Sabbath would sound like Audioslave or RATM by taking in Wilk, and that’s both ridiculous and presumptuous. He added a great sound to the mix and should be complimented.

The track “Damaged Soul” clocks in at just under eight-minutes, and it’s a fantastic mixture of modern-day doom and ancient ideas brought to a new, hopefully appreciative audience of younger fans ready to enjoy the actual music herein and not just the Hot Topic shirts that gives them mall-cred. Mr. Butler’s finger-thumping beneath the surface is just what the metal fan ordered, and he will no doubt send a legion of people to their bass amps and four-string axes to learn the pregnant, overpowering and often frustratingly-skilled lines herein. Mr. Osbourne’s vocal here is the familiar longing sound we’ve come to miss in recent years that just seems to ease out of the speakers with all of the trepidation of molten lava cascading down a volcanic hillside towards an unsuspecting village. No, he’s not the same demon that screamed out “The Writ” or “Looking for Today”, but this is definitely an Ozzy of older and still potent design.

The guitar solo in “Age of Reason” is so magnetic and fluid with Mr. Butler’s rapid plundering complimenting the effort; musically these guys are as potent in their 60’s as they ever were in their hungry, lean 20’s. The “Planet Caravan-esque” beauty of “Zeitgeist” is also the perfect ‘lull’ in an otherwise dark and heavy collective, for a Sabbath record without such an insightful, thought-provoking track is simply unacceptable. I’ll further admit that hearing Ozzy sing about a life in ruins through “Dear Father” brings a happy sort of dark joy to this old heart of mine. The little surprise ending of the domestic album (sans bonus tracks) is a smile-inducer for sure.

In terms of historical reference, Black Sabbath stands alone in influence, style and importance; with 13 the gauntlet is not only once more thrown down for all to see, it sits in defiant full view for the masses, young and old, to understand just what magic awaits with decades of heavy metal greatness both complimented and extended.