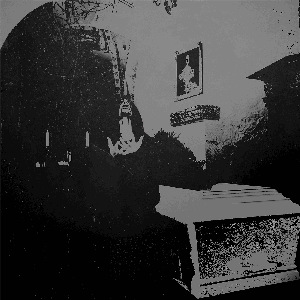 With so much obscurity surrounding Pa Vesh En’s image and music it’s impossible to predict where the fiend fronting the band is aiming at taking the listeners. Like a foggy path traversed whilst being blindfolded, every step is taken in fear, and as anxiety builds, so does the obscenity of Pa Vesh En’s work. With so many one man black metal bands coming to light only few have caught my attention; Pa Vesh En is amongst that few I speak of. The problem with most one man black metal bands is they don’t appear to be sincere as it is only done to represent or be apart of a phase or trend. Pa Vesh En separates from such by serving recordings that have a consistent image and sensation matching the high standard of the compositions, thus giving the listener a peep into his dedication. Many drew similarities to Portugal’s Black Cilice which is fair enough, but Pa Vesh En is much more mysterious and calculated than the mentioned, as displayed with ace on 2018’s A Ghost and the split with Temple Moon. Those entries provided glimpses of obscure figures and conjured all sorts of surmises surrounding Pa Vesh En’s intentions. Now, one step closer to the tomb, clarity diminishes, what little light was there is shunned completely and the echoes of Pa Vesh En’s lair elevates to a new height of horror.

And here we stand in a Church of Bones, giving my theories of a murderers confessions more weight. Keeping in line with the aesthetics of the past albums but sightly improving the production quality, yet still resembling white noise sound-wise, the accuracy of the music hits the target of providing a malicious and meticulously managed mare that manacles the listener/s awareness. “A Funeral Procession” dwells and festoones itself in dreary solitude, all the while using melody to horrify and drag its company into a mournful state. Though not being a fan of melancholic notes, the utility was a welcome one, giving more variance when proposing the idea of necrotic decadence. The song titles do give a larger aspect ratio of what the themes may be providing relevance to but still much uncertainty lingers. “The Venom Seed” seems to imply some sort of unearthly spawning after the act of necrophilia, and it can be assumed to be so judging by the prior track, “Pale Body Desecration”. The prior sounds like the kind of music that would indeed accompany an act so vile; sinister notes give shelter to the disturbing images materializing whilst the depraved vocals keep the consistency of the idea. As mentioned earlier, Pa Vesh En seems to be very precise and calculated; first the funeral, then the exhumation followed by procreation. And for the testimony, Pa Vesh En reveals “MY Obscure Obsession”, a grim, aggressive yet mournful play on music. Lo-fi drumming, trancy riffing and tormented shrieks and yelling cast themselves within the obscurity of the clashing frequencies.

If you’re new to this the production will throw you off due to the cloudy frequencies, but to those who revel in acts of this sort will surely appreciate every obnoxious second spent in trying to decrypt the meaning. Church of Bones keeps the music amorphous and the face of the monster still beyond description as the dread and outrage of his workings leave only the question as to what else slithers in the turbid orifice.