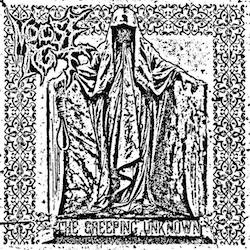 The Creeping Unknown released through Sentient Ruin Laboratories, attempted to crawl from the tomb, wander around in the graveyard in broad daylight, take a stroll down the street, grab some coffee from the local cafe, catch a new horror flick in the cinema and take a stroll back to the crypt without anyone noticing or mentioning a single word about the collection of strange occurrences taking place on that day. However, for Noose Rot’s debut Ep it is almost impossible to stay hidden when the music is this good and you burrow influences from other monsters within the underground. Sorry creeping unknown but you’re just not stealthy enough to remain hidden and obscure. Giving an account of something this illicit sounding makes it extremely challenging to exclude the use of hyperbole. Noose Rot’s 2018 EP The Creeping Unknown is 16 minutes of what sounds like a merging of Vastum and Spectral Voice. It sounds phenomenal, has an awesome sense of loudness and is very satisfying for being just 16 minutes in length.

The Creeping Unknown is death metal that boomshots the listener with heartfelt yaps, ugly snarls, and HM2 pedal craziness, all done with a pinch of doom, hence the reference to Vastum and Spectral Voice. The guitars, vocals and drums are addicting, they are merciless on the ears, the more you listen, the more your senses gravitate towards and beg for it. Though fairly mid paced, The Creeping Unknown does alternate the flow by introducing faster sections and sloth-like moments. If this short ugly slob of tumultuous death metal has cooked up a raving on Bandcamp, one could only imagine the racketing chaos a full length release will incite.

This is a winning formula Noose Rot has managed to put into effect and by doing so they have earned a slot in my wallet and collection.