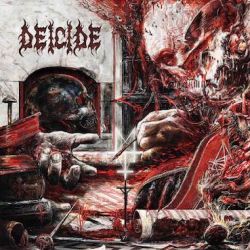 Type: Full-Length
Release Date: September 14th, 2018
Label: Century Media Records
Genre: Death
1 One With Satan
2 Crawled From The Shadows
3 Seal The Tomb Below
4 Compliments Of Christ
5 All That Is Evil
6 Excommunicated
7 Anointed In Blood
8 Crucified Soul Of Salvation
9 Defying The Sacred
10 Consumed By Hatred
11 Flesh, Power, Dominion
12 Destined To Blasphemy
MetalBite on YouTube
MetalBite on YouTube

I'm not sure if this album was worth 5 years upon arising, but I gave it a "B" anyway since Deicide is still playing aggressive death metal after 30+ years of being in existence. I'm going to say it but I always liked them the most with the Hoffman brothers in the band. They just were so much more creative from their debut all the way up unto Scars of the Crucifix. But now with newer lineup Ralph Santolla's passing and recruiting members to that of the likes of Cannibal Corpse, Order of Ennead, and Monstrosity things will never be the same again. Nothing can replace the innovative first two releases. But this is them now.

Being on Century Media Records now long over with Roadrunner Records (Hoffman era) it seems as though Deicide is still looking for their sound once again. I don't think that they can come up with anything that compares to the older albums. However, one good thing is that they've not lost the intensity and brutality. Sure it's difficult to duplicate what was in the past. However, it seemed as though after Once Upon The Cross they seemed to be lazy and in regression instead of progression. That's what I'm trying to convey here, they've at least put out something worth remembering a truly solid death metal album. The music is a bit monotonous, but it fits the vocals well.

Glen has not thrown out his voice so that's good and this quartet has many more years to make more good music. The riffs on here are at times somewhat technical, but they fit with the vocals. Again, not as innovative as the earlier days are concerned. But still, they're trying to reestablish themselves. Glen finds it hard to flow with creativity because bands aren't really making that much anymore. That has to do with everything digital and a means of getting music whereas the old fashioned way of doing it via CD's in long gone. I'd have to say that I'm still old school but I download as well. This album is a prime example.

So the production quality to the album was really good. You can hear all of the music and the vocals aren't overcharged like on The Stench of Redemption as an example. I just wish there was more variety to Glen's vocals because the old days he used to scream as well. The music, as stated above is mediocre, yet solid. Not to sound like a double negative, but really, a lot of the riffs they could've done a better job on. It's not a waste of a release by any means, it just needs more creativity and passion. 5 years to make a 37 minute album is a little weak I'd have to say. They should have more vigor than they do.

So, should you go ahead and buy the album via CD, or just download the digital copy of the album? Download the digital copy first to see if it's something you'd be interested in. I started off hating this release, then after repeated listens to, I'd have to concur that it's worth buying the physical CD. They're still kicking butt 30+ years in the death metal arena. They haven't lost it, they just need to be more creative. Just because record sales plummeted resoundingly doesn't mean you have to be disloyal to your fans. Glen needs to analyze that statement and take it to heart because there are probably millions that want to hear this album. Get it, NOW!!