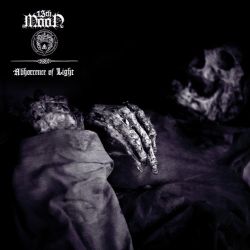 Opening with the hissing of the wind, a church bell ringing and a hymn being sung woefully; Its a short full-length album about 25 minutes worth of cruel guitars riffs, harsh vocals and simplistic, yet potent drumming.

Within this full-length release there are nods to Incantation in the vocal department, whilst guitars and drumming sound much like Ritual Necromancy's. These influences are very prominent throughout the album and are very forthcoming on the track "Primitive Existence of Devine Pain". As far as 13th Moon's identity and signature are concerned, I think they have managed to secure a distinct sound. That distinction dwells within the intro of the opening track "The Rite as Sinister as Old". With this track, 13th Moon makes it blatantly clear that although there is a significant presence of worship bestowed upon bands within the same vein; they have their own take on the music.

By mixing fast-paced drumming, then suddenly slowing down in an almost Burzum like fashion on the drums, they begin to add elements of what seems to be ghosting and shorting guitar notes. This effect works well in setting the tone for what's ahead for the remaining tracks. Abhorrence of Light is doomy at times with organs being played in the background to elevate the ominous forbidding aura 13th Moon executes so well. That is further complimented with instrumentals which don't exceed 4 minutes in length collectively. There is something bone-chilling about the riff on the final track "Breathing the Putrefaction of Their Grace"; it begins around the 2:30 mark. I feel like I have heard that same riff played on another album by a different band but I just can't string the lines together as of now. For a short record, Abhorrence of Light manages to give the listener just enough to increase the craving for more; almost like a glimpse of nipples on perky breasts of a busty ebony, blonde or redhead, (given its a straight male viewing them).

I don't think any amount of verbal praise would be enough to suffice Abhorrence of Light by 13th Moon. They have taken a formula and applied it better than many black/death metal bands have.