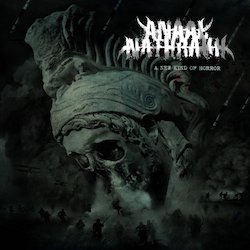 Buy on: Bandcamp
Type: Full-Length
Release Date: September 28th, 2018
Label: Metal Blade Records
Genre: Black, Grindcore, Industrial
1 The Road To…
2 Obscene As Cancer
3 The Reek Of Fear
4 Forward!
5 New Bethlehem / Mass Death Futures
6 The Apocalypse Is About You!
7 Vi Coactus
8 Mother Of Satan
9 The Horrid Strife
10 Are We Fit For Glory Yet? (The War To End Nothing)
MetalBite on YouTube

Every two years crazy and aggressive Birminghamians Anaal Nathrakh delight us with new release. A new kind of Horror isn’t too experimental and peculiar for this extraordinary band, but still Anaal Nathrakh are able to astonish extreme metal fans.

They started the band twenty years ago with total violence and absolute craziness, and even now their provoking and schizo ferocity didn’t dim in the slightest. All aura of this release is soaked in apocalyptic obsessive atrocity, so no remorse and no regrets, this album will disembowel you totally.

Fast and furious guitar riffs will cover your ears at one blow with only short intro for reprieve. All songs keep to one main guitar passage (and very simple one), so the songs depend on them, they create all the mood. Change of tune is very notable with refrains – psychedelic sound effects, falsetto screams, clean vocals, yes, its not possible to get bored with such variety of different musical elements (like in the songs 'Obscene as Cancer' or 'Forward!'). Technically album is performed good, but without too complicated and progressive moments, everything is based on aggression and intensity. Various singing technics of V.I.T.R.I.O.L. enrich every song with miscellaneous moods to immerse you in some eerie soundtrack to battle scene of World War I (band members are fond of this theme). There are lot of disharmonies (and with crazy vocals it intensifies the feeling), but regardless, the album doesn’t sound like cacophonic nonsense, it’s completely listenable and musical. Programming (especially with use of samples) is notable, because the correct use of sound effects and screams add psychological background to finish off your brains.

By reason of distorted guitars, speed tempo and blast beats this album can be surely categorized as grindcore record, but the black metal foundation still prevails, especially on song 'New Bethlehem/Mass Death Futures'. There is even heavy metal influence, so Anaal Nathrakh really didn’t limit themselves on this record. Noise-like industrial is like everywhere, all sound is based on it – very loud and chaotic, but in the same time almost clean and audible. And on the last song 'Are We Fit for Glory Yet? (The War to End Nothing)' you can hear some epic classical moments, so that’s strong and mighty finish of A New Kind of Horror.

Anaal Nathrakh continue to evolve their music, yes, the album is very anaalnathrakhish, but meanwhile it sounds fresh, so there’s the evidence, that they don’t stand on. But one thing has always presented on their music – the feeling of endless defensive protest mood, they scream and do it loudly against all the shit dominating in absolutely rotten and wicked human race.

Despite following these guys since the Hell is Empty, and All the Devil’s Are Here days, I have never gotten around to reviewing even a single Anaal Nathrakh album. Which may be strange, because they’re a band I actually quite enjoy, and for a period, was listening to them on a pretty regular basis. For me though, the last two albums have been a blur - they just came and went, not even bleeping more than a few times on my radar. Pretty unusual, then I realized what the problem was.

The problem, at least for me, is that Anaal Nathrakh need to step up their game. While they don’t make bad records, they are also not particularly great anymore, either. For basically every new Anaal song I hear now, I pretty much know what’s going to happen, and it shouldn’t be that way. The formula of brutality mixed in with the well-executed - yet extremely predictable - clean, operatic vocals is starting to get a bit on my nerves at this point. It’s just too straightforward for these guys now. It just feels like too well of an oiled machine - the delivery and feel are sterile and mechanical. These guys really need to throw a wrench into their own system, dismantle it, then think of another way of putting it together. Because Anaal Nathrakh has been putting their albums together the exact same way for way too long now. The formula they have here needs to be updated. These guys could very easily be more extreme, faster and crazier than they have now, if they could just branch out a bit more and experiment with different concepts and sounds. I’m not sure if they are limiting themselves or that this is just the limit, but I would like to see them break out of the shackles they seem to have built for themselves.

There is a single new addition to the sound which I like and welcome, and those are the operatic, high pitched screams. Let’s face it, Dave Hunt has always been a good vocalist - even sometimes great. His rougher vocals combined with the Halford style screams he has going on here is quite effective. The music however, while being classic Anaal Nathrakh, will not surprise you at all. It pretty much sounds like their previous 5 albums. I don’t know if that’s a good or bad thing for you, but like I mentioned before, it’s not such a great thing for me. I can’t even tell them apart anymore - the arrangements, riffs and ideas are so, so similar. I guess it all comes down to when you started listening to this band. If you’ve just discovered them, then this might be great for you. But if you’ve been around for a while, you may be getting sick of this formula. I know I am. Which is a shame, because Anaal Nathrakh seem to have so much to offer.

All of that said, it is still a pretty respectable release. It’s not liked the guys went off and did something stupid with their sound - this is still 100% Anaal Nathrakh. And for some people, perhaps that’s all they want. But I am not one of those people. After spending roughly four days with this album, I will be focusing my attention elsewhere. Because this isn’t a new kind of horror. It’s the same kind of horror they’ve been releasing for the past ten years.