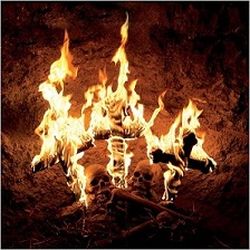 Spectrum Mortis stretches far beyond the realms of darkness in order to acquire and translate the twisted visions locked within a demon's pineal gland. If you took trademarks of death metal, doom metal, funeral doom, second wave black metal and bestial black metal; fused them together in a violent whirlwind and waited for the storm to settle; then this would be the final fruits of the squall. A plague-riddled, sadistic, primal, carnivorous, unpleasant benefaction; being painfully excreted from an ogre's anus.

Blasphemare Nomen Eius initiates the torment with a sample of creaturesque sounds and distant wailing in the background, perfectly creating an unsettling environment absent of comfort and hope. Once the mist creeps in and blankets the already bleak scene, a pounding drum of doom accompanied by deterrent guitars, accelerates the beating of the heart, as you fearfully await the spawning of an otherworldly entity.

The standout track (as I see deem it to be) "Hymnus Mortis et Cruentum Sacrificium" attacks the listener with an intro of what seems to be the creaking cellar door of some forsaken realm; accompanied by sorrowful wailing and screaming. The opening guitars played by Aath and Aataa carry a very resonant psychedelic doom feeling, that strikes the core of soul with much force and precision. It then quickens in pace with the use of traditional black metal drumming; then returns to its former slowness in a heavy doom riddled, dragging guitar dominated section, which is covered by Sheram's voracious vocals.

Every band member plays their respective roles with exceptional care and professionalism. Ta'ao's drumming is a mix of various styles; one can identify black/death metal segments /"war metal" as some may call it, black metal and the dominance of death/ doom drumming. The power chords laid on the EP, instill a picturesque portrait of a famine-stricken land, whilst ravenous bursts of tremolo picking marinate the rotting bodies, scattered across the withering landscape. Upon delving further, one easily can identify the understandable, loud, lawlessness of the lyrics, rigorous and purposely pelted out from "Sheram's" flesh - tearing vocals. The vocals Sheram summons onto Blasphemare Nomen Eius are a hybrid of black metal barks and death growls. They are dungeon-like and somewhat understandable in terms of audible clarity, and easily transports the listener into the visions being broadcasted.

Spectrum Mortis is a band which goes above and beyond in their efforts to deliver an enjoyable record with a high level of replayability. They take some of the common trademarks of extreme metal and blend them into their modus operandi. I have given this record countless spins over the course of acquiring it. And it is with absolute certainty; that those who cross paths with Spectrum Mortis' Blasphemare Nomen Eius will likely do the same. What's that you say? You like death metal, doom metal, funeral doom, 2nd wave traditional black metal, and bestial black metal? Well, it's all here in this 25-minute malefic masterpiece of malice and molestation. Blasphemare Nomen Eius is short in length, as an EP usually is; however; the high quality of the musical compositions resemble the offerings of a full-length release. Spectrum Mortis has gained my unconditional support and I hope they continue to release music of such a high caliber. I look forward to their upcoming 2018 album קדוש and wish them the absolute best in their future endeavors. HAILS!