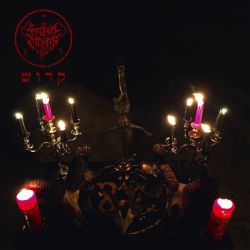 The second phase in summoning the beast dawns in the form of קדוש and does precisely what was necessary to keep the momentum flowing strongly through the cracks of existence. The path is still drenched in the fluids of the last blasphemy, but this new dusk brings a tribal evolution, one that aims to add depth and a darker, more nefarious layer of ceremonial hawking, drumming and riffing.

Spectrum Mortis’ second Ep קדוש is a continuation of what was birthed for the masses to consume, one noticeable difference here (among others) is the production which has taken on a deeper sound thus impacting the ritual positively. More work has been put into the compositions which have adopted a slightly more melodic sound and there seems to be a clearer more prominent effect of the guitars on the record. The vocals are the same as on the previous but the drumming seems to have undergone some changes since Blasphemare Nomen Eius, a change that would see Spectrum Mortis’ music adapt more death metal oriented techniques with more differentiating time signatures that ride on the buzz-saw guitar leads. As much as I love the 1st album they released in 2016 because of the primitiveness it displayed, קדוש shows sprinkles of early maturity in the music with the incorporation of more flexible drumming and guitar playing. These changes are easily heard throughout the record, they appear from the beginning of the 2nd entry on the track following the intro. “II. Fiat Nox (Hymn to The Master of Death)” is the first song that brings to front the newer, more polished, multi layered style of Spectrum Mortis’ song writing and production on קדוש . This album sounds much more hateful than the previous, vocals are enunciated with more conviction and depth, the echoing reverb also feels more fitting and necessary than before and the drum work is more diverse, but it is also more meaty. The best song on קדוש would have to be "III.Et Filius Aurorae (Hymn to The Son of Dawn)"; it has everything I was hoping the band would evolve into. The death metal riffing borders black metal trance like tremolo picking occasionally that gives the album a dense, misanthropic, ominous feeling. Everything about the music this time around is stepped-up and enforced with complimenting factors to the band’s style of death metal.

קדוש is superior to Blasphemare Nomen Eius in ever way; the value of this record seems to shoot higher with every listen. Spectrum Mortis has shown within a short period of time they are beyond capable of making death metal that adheres to the ritualistic feeling many bands have started adopting with only so much success. If a full length comes after this it will be very difficult to top what was offered on קדוש. This is the kind of performance in which you can feel the energy being expelled through each instrumental note being played, it is at times simplistic and simultaneously exhausting, yet whole-fully engaging. What will be next from Spectrum Mortis? Only the veiled altar knows.