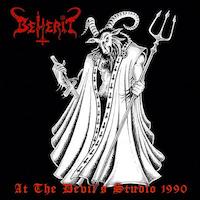 What we have here is the once thought lost debut album from the Finnish cult band known as Beherit. The group’s career reads like a how-to in both what to do and not do when entering the music business. While truly very early black metal that resonates if, for no other reason, intrinsic value of black metal.

Without too much back story on Beherit, suffice it to say that most of the recordings issued by the band are muddy messes, plain and simple. The vocals are muffled gargling most of the time, the instruments are criminally underwhelming, and the production is the sonic equivalent of expelling gaseous anomalies into a stream of endless coffee cans. With that said, if you’re looking for something that encompasses all of the wondrousness of underground dark music Beherit is a fitting reminder of that primitive, ancient era called the 1990’s. For most in the underground this recently discovered tape is a treasure unearthed while for others it’s simply another messy addition to a discography filled with mediocre, yet coveted music.

The Oath of Black Blood as a compiled piece is the first observance I had to Beherit some years back and I found it somewhat unimpressive. Now we find that the true album slated for its spot is found and I will admit that, while still an unmitigated lesson in lethargy, the songs fare much better in the, dare I say, rawer form? After hearing two decades of tremendously vibrant black metal, surprisingly wasteful efforts, and downright pathetic attempts at pimping out the lineage I can properly place Beherit in the spot it belongs and find its value somewhat enlightening. The tracks on this album are a bit more brutal and seemingly more structured than what ended up on the Oath album, so for that alone it’s like getting updated, albeit period-attentive Beherit to ingest and enjoy. And yes, Beherit can be enjoyed in the right frame of mind; it takes a special person to understand black metal music for what it is, not what the masses tried to turn it into. The demographic that was created in the mid-90s to lure and subjugate the scene kids has all but ruined the history, save for albums like this that embody all of the nuances and honesty of the period. If this had been some re-recording or other cash-grab attempt to embellish the movement I’d have not even bothered to review it. The historical value herein is its true gift.

For my taste, nothing comes close to Engram or Drawing Down the Moon, but there is some real value here for those of us that long for the old days of black metal when, in short, black was truly black enough. Some of these ‘updated’ tracks really showcase the core sound that was this movement back in its infancy, and oh, what a brilliant youth it had! If for no other reason, this album should be heard by the masses, new and old, because I guarantee any mall kiddies hearing this album will run for the safety of Mastodon or Cradle of Filth because they will never get this in a million years, and that’s precisely as it should be.

It’s our world, kids; we just allow you to occupy space for fun and relentless banter.