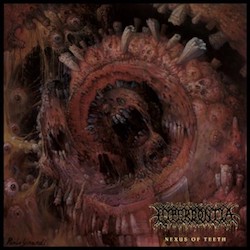 Ambition has been, and will continue to be, a quality that sets more involved and serious up-and-coming artists apart from their more casual peers, but it is especially important when the artist's craft is focused on authenticity. This is why Denmark/Turkey's Hyperdontia, originally formed as a super-group containing alumni from the Dark Descent Records death metal scene, have set themselves apart from numerous other bands inspired by the rawer, more rotten side of 90's death metal. Not only have they consistently kept our hunger for audible repugnance satiated with a few of cherry-on-top releases in the span of just a couple years, but listening to their 2018 full-length debut entitled Nexus of Teeth reveals a technically marvelous side of this generally cryptic and unnerving fare.

Really, it's as if their songwriting ambition coupled with their years of experience in writing and playing death metal has blessed them with an infallible momentum that repeatedly nails the sound and atmosphere down to a sickening science. Mustafa, the riff dealer and head of this project, is somewhat parallel to Trey Azagthoth of Morbid Angel fame in this ambitious sense, wanting very clearly to "destroy everybody" as Trey did circa "Altars of Madness". Parallels to the FLDM gods end there, however, because ultimately, Nexus of Teeth hones all the subtle tricks of Scandinavian oddities from Demilich to Depravity with a surprising (obviously modern) clarity to the sound, sort of making the winding, grime-covered labyrinth of their tremolo riffs echoing with David Torturdod's low gutturals slightly more navigable. Yet, this is counterbalanced by the fact that the compositions themselves take the technical aspect to the next level, due in no small part of Mustafa's guitar mastery, allowing Hyperdontia to tightrope between rotten caveman death metal and NY-inspired dissodeath. This makes them a notable oddity themselves, any individual segment of their cuts feeling like a putrefying road somewhere inside the bowels of endlessness.

Is Hyperdontia's full-length more accessible than other "cavernous", slime-ridden death metal? Sort of. Like when I first heard Undergang in 2017 or '18 with "Misantropologi", the music was like trudging through a dark sewer, but when the vocals came in, I knew I'd encountered the malevolent entity inhabiting the sewer. It was like "shit, man!" and it gave me that sense of "oh, it's too late to turn back now...", whereas the more technical, less sludgy (but still very fucking heavy and crushing) riffs of Hyperdontia feel more like being disemboweled by an egg-beater, as I often say, but they're catchier too. The blast beats and semi-dissonant tremolo riffing are a very relentless attack, and the muddy guitar and bass tone will make sure your body festers after the music adequately eviscerates you, since it leaves an atmospheric aftertaste in the same way Depravity's "Silence of the Centuries" does. Slower segments are to be heard here and there, ('Of Spire and Thorn' especially) breaking up the relentless (even a bit thrashy) riff onslaught with sustained power chords and eerie melodies. 'Euphoric Evisceration' is a change of pace, offering somewhat less battering riffing for more of a clear, driving punch. 'Aura of Flies', meanwhile, feels the most like it could be from a 7" released in the early 90's, since it's slightly lighter on the technical intricacies, offering a bit more conventional bludgeoning power-chord action you might expect from the "Left Hand Path" title track.

Hyperdontia's Nexus of Teeth will appeal to just about any type of death metal fan who's not a wimp. If you like Immolation's dissonance, Abhorrence's abhorrence, Demilich's winding-ness, Incantation's atmosphere, Bolt Thrower's momentum, and whatever else the DM gods have to offer, you'll get down with Nexus of Teeth. Moreover, it's quite the culmination of the tendencies of cryptic death metal demos of the previous century, proving that Mustafa and co. have studied this music and mastered it. I like it when I hear a debut album and somehow know the next one will be even better. Hyperdontia are headed for rancid places, and I don't think the guys would have it any other way.

Dark Descent Records does it again this time with Hyperdontia’s 2018 debut full length album Nexus of Teeth. Since my introduction to Hyperdontia back in 2017 with their short but vile ep Abhorrence Veil they have kept me in the act of pondering and anticipating their next effort. The 2 original songs plus the bonus cover track on Abhorrence Veil were so deeply rooted in the old school death metal sound that it was virtually impossible for myself or any fan to pass it by without giving any form of attention. The vocals and riffs on Abhorrence Veil is what magnetized my interest to Hyperdontia, its stench reeked a merging of Demilich and early Incantation. Now in 2018 they have returned with feet still wet and salivating mouths ready for the feast. Hyperdontia here loose the beast to run rampantly and have its way with the audience. Firstly the artwork is disgusting. It’s the most abominable vagina I’ve seen on a death metal album cover. Remember Mitchell Lichtenstein’s 2007 film Teeth?, well this artwork was probably inspired by the concept of that movie. Just imagine if your girl had a surprise for you and that was it, a rotten carnivorous puss; something that tore penises off and swallowed them into its abyssic gut. The vocals are delivered more vilifying than on the previous record, the drum work is both semi technical and straight forward and the guitars bite deep and mercilessly.

From the onset we get the music full blast showing-off all the essentials of old school death metal with lots of modular guitar licks and drum work; death/doom introduced conspicuously and surprisingly. No 2-3 minute intros or interludes anywhere on the record just relentless bashing from start to finish. Hyperdontia refuse to squander time by bringing intros into the mix as ever so often bands tend to do, which isn’t a bad thing if it is attached to the music or concept of the record, but it becomes overbearing at times, and doesn’t help when the music to follow isn’t even good. Hyperdontia gives old school death metal fanatics a modern mutation of Onward To Golgotha played faster and smeared with the lewdness of Abhorrence Veil. These riffs I cannot get enough of, every new segment is a new fret-board razzle-dazzle or a pristine breakdown that makes you want to rewind the entire album. If I had not resisted the temptation of repeating Teeth and Nails, I probably would not have completed listening to the record, hence rendering me unable to write a review of Nexus of Teeth. “Aura of Flies” is such a sick title and the musicianship on it is stunning; the vocals attempt to swallow the listener, the snare drum during the blast beats is crazed and the guitar licks do not fail to fasten themselves to the flow of the bass and drums.

“Escaping the Mortal Embodiment” and “Existence Denied” are drenched in waves of mayhem, pinch guitar sections, sudden variations in time signatures, thrash metal drumming, riffing and deep sinister growling rival each other whilst maintaining unity. These tracks display the technicality and rhythm of Hyperdontia better when mixed with such a high level of intensity. You have to appreciate the fact that this sounds like the the type of effort one would come to expect from a band that had debuted strongly. They took the positives of Abhorrence Veil and belabored those aspects in such a way that they have become connected to the band and can be viewed as vital constituents of Hyperdontia's DNA. They have established an identity for themselves even though borrowing some facets of Incantation. Hyperdontia’s consistency throughout the record is amazing, it’s relatively easy to lose interest in death metal records given it has been done so many ways by so many bands; but the dense sonic waves of audible attack mixed with those muscular and memorable guitar solos, riffs, leads and vocals that pour out a diabolical chunk of lyrics makes for a grotesquely exciting adventure. The production is thrilling, it captures the spirit of old school death metal and uses it as a force to project Hyperdontia’s vision of revulsion. The snare and double bass are thickly mixed, they add to the claustrophobic atmosphere of the vocal delivery and the overall evil tone. Those vocals are quite identifiable because they appear to be a blend of traditional death metal barks and the gutturals used in brutal death metal. It’s good to have a vocalist that can be pointed out by anyone whom is a supporter of the bands music; thus the identity of the band is not clashing with that of another.

This is a contender for death metal album of the year; you wont regret picking up this Dark Descent release. Hyperdontia has me craving for more of their filth riddled recipes.