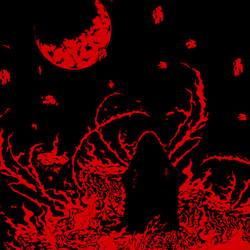 The two primary outlining factors that comprise a good or even decent speed metal album (for me) are…... well…….. speed and guitar solos. Unfortunately for Outline one key element is missing, that being the guitar solos. Though not the only problem Fire Whiplash is confronted by, the absence of this key entity comes at a huge disadvantage for Outline. Not only does it make Fire Whiplash seem like an insufficient and lazy performance, it questions the band’s passion for the genre if they are genuinely zealous about composing speed metal. For just 22 minutes of material Fire Whiplash cannot be seen as a full length offering. Personally I consider a full length speed metal album to be at least 30 minutes with 35 minutes of playing time being the maximum. 22 minutes of no guitar solos and a few fast songs is not ideally convincing especially for a newly formed band that wishes to make their imprint onto the genre’s slate. I felt as though I was listening to a gore-grind version of speed metal, the kind of gore-grind album that has 20 songs, each baring 1:45 seconds of insipidness. Also one must take into consideration that Outline had released a demo in 2017 titled Fire Whiplash which features 5 of the 8 songs featured on this so called ‘debut full length’. This isn’t a good look for Outline given that only 3 new songs were added to their 2018 Hell’s HeadBangers debut album, those being; “Black Eyed Devil”, “The Assassin” and “Hell Squad” which don’t offer much at all and are not nearly as memorable as “Away From You” and “Lady Teaser”, in which are slow to an extent and can be found on the 2017 Fire Whiplash demo.

The exclusion of guitar solos is unacceptable; not sure if this musical decision materialized subconsciously or whether it was intentional; nevertheless, this absence is unforgivable; It’s like a pizza devoid of cheese or a rainbow without blue, red and green, it just doesn’t work. Doing this only makes the band seem diffident or tentative in that particular field and even places a blemish on the band as a collaborative unit. For it is usually the guitar solos that determine whether or not the music has any coherence particularly within the genre of speed metal.

A promotional video for the track “Lady Teaser” was released in which highlighted the stereotypes as I expected; the alcoholism and hot metal chicks were in full display in all the petite leather lust. I can see why this was necessary, thus given the music on Fire Whiplash is clearly not convincing enough to be labelled as a genuine and competent speed metal album.

There is one positive take away from Fire Whiplash, that being the vocals of the front woman. As bad as many people think they are, I admire the shit out of them. Her vocals sound very organic and raspy, her mid-range highs have a sort of sexual wailing that I like as though she is about to achieve an orgasm. Hearing her style of screaming got me really hard really fast. They even sound to be veering towards the good cheesy side of Karaoke, especially on the track “Away From You”. As much as I like her vocal delivery there is no way they compensate for the lack-luster overall performance. I cannot score Fire Whiplash highly especially when there are actual speed metal bands such as Evil Invaders, Metalian and Black Magic (Norway) who have exhibited nothing short of brilliance in their musical compositions. As of now Outline is nothing more than a watered down version of speed metal in my opinion, perhaps they can be labelled as a speed core band until they decide to get serious.