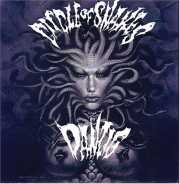 Let’s just ignore Danzig’s extra-curricular activities for the moment and look at his musical output of late. We all know that’s been largely sub-par; we lost the great bluesy drawl that made his best albums so sublime, and his amazing, soulful voice got distorted under the weight of studio trickery. Tracks as devastatingly beautiful as "How the Gods Kill" and "Going Down to Die" became a thing of the past as the Evil Elvis wrapped himself in a cocoon of the all-too-modern. Now we arrive at album eight and the last bit of tradition is out of the window; there are no more numbers kids, it’s just Circle of Snakes.

I’m sure opener "Wotan’s Possession" is meant to be the scene-setter; the eerie intro to a soundtrack of bleak and soulful metal. What it actually sounds like is an Oompa-Loompa death march (no dwarf-related jokes please). It’s time to bear witness to another disappointment; apparently the guy still has his finger on the pulse, little realising that the pulse stopped when the body died about a decade ago.

The second warning sign is the obvious lack of effort spent on recording the album. The guitars sound like the audio equivalent of processed cheese. The dense tone is too heavy on the bass and makes some rather natty riffs sound lazy and stilted. Meanwhile the drums don’t fair any better, sounding tinny and weak, for a while I thought I was listening to a shoddy MP3 rip. The whole thing literally sounds cheap and muddy.

And sadly, Danzig himself doesn’t sound like the damn scary dude he used to. His voice has just lost that deeper and natural timbre that made him sound so … Danzig. The majority of the singing sounds forced and desperately strained, something evidenced clearly in "Hellmask" with its wide-open, up-tempo verses calling for a great Glenn holler but getting a forced yelp. Maybe it should be expected as time takes its toll, but what is a Danzig album without those stunning and imperious vocals? I suppose it’s a good thing then that his vocals aren’t dominating the mix anymore, even if it is a sad sign of the times.

Song-wise there are some really good ideas on this record with "1000 Devils Reign" harking back to the past in a way that would have probably seen it sneak its way onto a classic album, had it been recorded with a bit more care. In contrast the likes of "Night, Besodom" sound thin on the ground and hastily thrown together with tedious and clumsy structuring. Of course one can’t throw all the blame at the main man. I just don’t see Tommy Victor as a musical match for him; he just doesn’t have that bluesy spark John Christ used to great effect and consequentially the guitars lack a distinct personality.

Basically, this could have been a solid if unspectacular regain of some form. It’s sad to say this, but the album is lacking in so many ways that it’s just another disappointment. I’m calling time on the poison dwarf, and I’m thankful I’ve got long enough legs that I could probably outrun him.