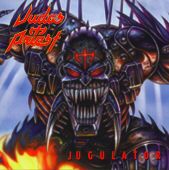 I can’t believe these grandpas are still making music! It’s been, what, 30 years since "Rocka Rolla"? Judas Priest have become true metal legends and gone through so many sound changes, and the weirdest thing of all is that they’re heavier now than ever before! They perfectly fit in with the new underground scene: In Flames, Nevermore etc. What model musicians to fucking backstabbers like Metallica, Megadeth, and Anthrax, they need Judas Priest-their fathers to whack them over the head and set them straight.

Although a valiant attempt, "Jugulator" doesn’t even come close to the utter perfection of Painkiller. It’s got the heaviness, the screaming vocals and the speed but there are way too many weak points.
First off, each song is written in the exact same way, first a cheesy one to two minute intro, then the riffs start and from there on it’s the normal song structure. Verse, chorus, verse, chorus, solo, verse, chorus. The lack of creativity gets very annoying after about the 8th song. The quality of most riffs is pretty poor as well. Just why the hell -why- I can’t figure out, it’s been seven years since their last album!

And second, this album has THE cheesiest lyrics I’ve ever read in my life! And the new dude, in his attempt to sound serious, sings them even funnier! Just listen to this with about three seconds between each phrase, lyrics to "Decapitate": "Your head, you will lose it. Severed, when executed. You always thought, you’d never get caught, Decapitate, sealing your fate" and so on. Pure hilarity.
The first and second song have the best riffs after the intro, and "Dead Meat" and "Bullet Train" are definitely the best songs on the album. "Dead Meat" has so much energy for a band of 50 year-olds, it’s just amazing. And "Bullet Train" has one of the best solos I’ve heard in a long time.

They’re not quite starting to lose it, not just yet anyway, but I fear the day is fast approaching when these legendary metal souls will put down their instruments once and for all.

Bottom Line: For band with 30 years’ experience and seven years preparation, this album has disappointed me beyond belief. They’ve proven they can do a LOT better.