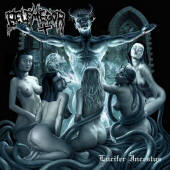 The band whom has created their own unique and diverse style of death and black metal really hit hard with this release. This album is just perfect. It's so good. It's promising before listening, it's promising during listening, and you'll definitely be satisfied with this when you finish the whole thing, no doubt at all.

Their first album was some pure death metal with some black elements, the second album definitely pure black metal, the third album is a mix of the two but still not quite there yet,,, but with Lucifer Incestus, the band has really found their perfect natural sound. The solid style they've been trying to formulate, now they've got it.

I seriously cannot find anything wrong about this album at all. For firsts, the title and album cover. Lucifer Incestus, that's pretty new and unique - to me at least, one of the coolest album names I've heard. The cover art is a bunch of naked ladies and nuns surrounded by serpents, all sitting near this devil figure getting up on him and whatnot, that's pretty badass if I do say so myself. Most of the time a cool cover makes for good music, and this album proves it has the balls with a cover and title as so.

There's an interludish intro before the actual music starts, doesn't really need to be there but at the same time it makes for a good preparation for the music. Then comes the first song off the album, 'The Goatchrist'. Holy crap, they couldn't have picked a better album opener. 'The Goatchrist' is undeniably the best track off this album, for obvious reasons. A cool drum pattern at the very beginning, awesome riff, then blast-beating with some devilish shouting/screaming. SO CATCHY. Remember, this is a death/black metal album, so it's not only a one-sided thing. This is revolutionary.

Every single song on this album is enjoyable. There are no bad or boring parts, nothing repetitive or underwhelming, this will keep you entertained until it's done. All tracks are memorable and different apart from others, you'll be able to remember separate tracks alike from this album. That's one of the best things about it. The riffs are very very good. The guitars are the best part, it has the emotional and atmospheric grind-y appeal and vibe of black metal, and the heaviness and power of death metal. As I've said earlier, this couldn't have been a better album especially considering the sound of the guitars. Great riffs, all the songs are differentiated and good. Most albums similar to this one can tend to be a little monotonous, but the masters Belphegor do it right, with this album. From start to finish this is very entertaining and enjoyable.

The drums have a tight pummeling sound with a slight metallic tone, (if the "metallic" part makes any sense). Drums sound absolutely perfect and go perfectly with the guitars. The drumming is consistent, relentless, and brutal, which is perfect for an album that mixes death and black metal. The black metal tone of the heavy death metal influenced guitars with the crushing machine gun drums is outstanding. The vocal work is another great mentionable aspect, with vocals ranging from screams, shouts, gutturals, growling, a moderation of screaming/growling, you name it. It goes all over the place with these vocals.

Great riffs, amazing guitar sound, outstanding drum work, expansive vocals, cool album/song titles, and you can’t forget the beautiful cover art obviously. Is there anything more to ask of? I don't think so. This album is flawless, seriously. If there are any flaws please do tell me about them because I cannot find any here at all whatsoever.

When I tried out Belphegor for the first time, this album was an instant favorite of mine, I was instantly turned on and attentive to the beauty that this reeks. I don't regret coming across this album; nor the band at all. Lucifer Incestus is self-proven amazing, it’s one of those albums that's perfect the whole thing through, 10/10 as it truly deserves.

In the metal scene many bands have been around for quite some time, but unfortunately have not received what they deserve. Such is the case of Austria's Belphegor, who with their newest Lucifer Incestus, really prove how well they can unleash hell and leave bands like Marduk or Dark Funeral wondering how the hell they did it. Lucifer Incestus comes after Infernal Live Orgasm, one of the most 'live' sounding live CDs ever recorded, and sees the band following the black/death direction they are known for. I really hope this time the band can get to more people, because one thing is for sure: if you want heavy and unholy metal, it does not get any better than Belphegor.

Lucifer Incestus opens with 'Inflamate Christianos,' a normal intro (and only bad aspect of the CD) that really does nothing for the release. Why do bands keep on putting out boring intros instead of using that time for a piece of music or something else? It is just nonsense. Then comes 'The Goatchrist' and things really get interesting. The pummeling starts with heavy drums, courtesy of Torturer who is a freakin' machine, killer guitars and a production that is simple and clean, yet heavy as shit. In 'Demonic Staccato Erection,' we see the Belphegor using some keyboards that really give something extra to the overall composition. Another killer is 'Fukk the Blood of Christ,' which starts with a very Slayer-esque rhythm before turning into complete hell that somehow reminded me of Naglfar during the Diabolical era. In 'Ein-Hellfucked' we see the band following a more death metal path that will leave you screaming for mercy. 'Closer Fleshrequiem 69 Outro' sees the band doing some chanting and incorporating epic slow tempo rhythm's that together with some acoustic guitars, take you on a depressive journey. Good compositions, great production and a true art form. That's what metal is all about.

Lucifer Incestus is a really great CD for all you black/death freaks out there. Go out and get it! It may not be the most original piece of music you ever listened too, but it surely is one of the best ones released this year in the genre. Buy it and show Napalm Records that the American market is just as good as the European one when it comes to metal. I am saying this because in Europe Lucifer Incestus was released almost a year ago and that simply sucks.