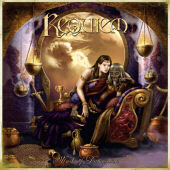 Power Metal is one of those varied metal genres that seem to keep growing even if it seems to have become stagnant. One only has to listen for a while to hear the pure musicianship it takes for Power Metal. When that same Power Metal takes many great cues from a variety of metal including Prog Metal, it just seems to take a life of its own and becomes nearly a genre on its own. With this little segway, here is a band that shows this crossover in a way that is out of the norm here– Finland’s Requiem.

Take one part Helloween, one part heavier Queensryche and add in some Children Of Bodom … you have Requiem. Not only do they combine these elements brilliantly into a sledgehammer effect – they also set the keyboards back in the mix, where most Power Metal acts do not, to let the power of the guitars take the lead. I for one applaud these choices and hope people like Children Of Bodom would follow suit.

I love all the tracks, but I seem to be more partial to just two. One is the title track of the album which is sweeping with masterful guitars and yet is bludgeoning heavy as well. The other song is the blistering riffage of 'The Dying Embers', reminding me of Dragonforce who have seem to become more for song that for the shred. Both kick and both are written great. The recording of the album is not as good as it should have been and that detracts somewhat from the album as a whole.

Power Metallers will applaud Requiem’s 2003 release, and regular metallists will be also extremely impressed. I found the album to be a welcome surprise – as Power Metal is not my favorite, but I do love it when it’s done with a twist. Requiem does just that… too bad they have split up now, would have loved to hear more from them.