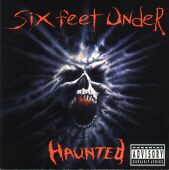 Most of the albums that Six Feet Under have released are not good, but their debut isn't all that terrible. Throughout the years they've morphed into their own sound of this cheap sounding "rock 'n' roll death metal" that isn't all that great. At least with Haunted they still had some originality and ideas. A decent little death metal album but not really a "great" one. Only an album to listen from time to time.

Started as a side project of ex-Cannibal Corpse vocalist Chris Barnes and ex-Obituary guitarist Allen West, you'd probably expect something unique to happen, and that's actually what we got here. Basically, Obituary with a Cannibal Corpse feel. Heavy death groove with some brutal vocals. Not bad, not a bad idea at all. The guitar is heavy while being played in a groovy style, the drums have a good sound, the snare is solid along with a heavy kick drum. The bass is pretty noticeable too, you'd think since this is an album that mixes death metal and groove metal that the bass wouldn't be noticeable, but it is. The guitar doesn't completely cover up the bass, which is excellent. Also, this is when Chris Barnes was last good at vocals. Here on Haunted there’s some remnants of Cannibal Corpse in his growls, but after this release they completely fade away. This is the last time Chris Barnes actually sounded good. Rip Chris Barnes' vocals (1986-1995). The style of this album is pretty cool, but the whole thing would be infinitely better if SO MANY tracks weren't so boring.

This album is known pretty much for its first three tracks, but mainly the first two; 'The Enemy Inside' and 'Silence Violence'; as they are some of the band's most popular songs to date. Those two songs are absolute bangers, great openings, awesome riffs, song structures, drumbeats, etc. Those two songs are fabulous guaranteed and will always be stuck in my head because they're genuinely catchy and creative. Since Haunted presented a slightly new style in the death metal scene, these songs stuck out a lot. Both songs are catchy and have memorable drumbeats, riffs, and lyrics. But that's not the case with the rest of the album. After the first four tracks, this album instantly lacks musical creativity and direction. Seriously, it’s like they had the first four tracks written greatly and ready to go, but when they had to come up with other songs they came to a writing block and lost all ideas. The first four tracks had something cool going on but the rest of the album is just downright boring. Dreadful and boring riffs, weak drum playing, slow tempos, generic as hell song structures. At this point the album is going absolutely nowhere. What a disappointment. This could've been so much better if they had more songwriting ideas.

This album has some originality but it is executed badly. This is definitely one of the band's better works, but nowhere near an amazing one. Yeah, they had some ideas when writing this thing but towards the end they lost all direction and totally flopped. This album would've been great if they took the time to write better songs for the rest of the album. I don't recommend this album to anybody at all and I never will, but if you're trying out SFU for the first time, please PLEASE listen to this one first.

Six Feet Under does not belong to the (great number of) bands that have impressed me deeply. In most cases, I miss the crucial dose of inspiration. Many of their pieces have a uniform appearance and do not offer one or two details that separate high class songs from solid numbers. Even worse, their mid-paced, fairly groovy metal conveys a feeling of exhaustion the longer the full-length lasts. Together with the monotonous vocals, the music does everything to avoid a vibrant aura. This is a pity, because single songs have a certain substance and would have worked on a 7". But here they go under, because the almost 39 minutes have no ups and downs.

In my humble opinion, it is mainly Chris Barnes who ruins the album. The instrumental sections do not ignite a fire, but it is also true that they do not suffer from major flaws as well. Everything is solidly performed, without any fascinating hooks, gripping riffs or exciting lines. Just solid, no more, no less. But Barnes sounds simply ridiculous. He is not the only one who celebrates this approach, I know. But his oh so demonic deep voice leaves him almost no room for any form of variation. It does not sound natural, it does not sound interesting and his rare, gnome-like nagging does not make things better. Maybe this kind of music requires such an emotionless style of singing, but a charismatic performance sounds different. I also miss some high-speed parts. Maybe it was my fault and I should not have bought this work. But as long as we do not speak about doom, extreme metal needs extreme tempo from time to time. Too bad that Six Feet Under obviously do not share my point of view. Even Terry Butler, who has been involved of great records such as "Spiritual Healing", did seemingly not realize that something's going wrong here. Six Feet Under have some swift parts every now and then, but high velocity does not play a role. Boring.

The album fails to provide songs that deserve an in-depth description. It sounds a little bit like the weak brother of Massacre's "From Beyond", to stay in the past of Terry Butler. The best songs of Massacre's debut had something that kept sticking in the mind - a catchy riff, an eerie beginning or a dramatic configuration. Haunted does not provide these or any other elements that make an album accessible. Quite the opposite, some parts sound stale. The pretty conventional patterns also do not draw me into the more or less well produced songs. I cannot say that the mix shows serious defects, but it also fails to create an appropriate intensity and power. Mediocrity has a lot of faces and the formation shows us many of them. Needless to say, that the lyrics also praise ordinariness while delivering the genre-typical content. In short, this album is much better than their cover outputs, but not good.