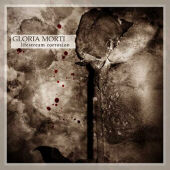 Finland’s Gloria Morti is one of the leading bands in the revival of the crossover between black and death metal. As their first release Lifestream Corrosion shows, Gloria Morti has musical maturity beyond their years. After listening to the album a few times, I was shocked to learn that the band had only been together since 1999! Lifestream Corrosion can simply be described as an orgasmic musical adventure, suitable for anyone who enjoys extreme metal.

The music on Lifestream Corrosion takes the listener on a flawless, flowing journey through each genre of extreme music all in one track – something few bands have done successfully. A great example of this phenomenal flow, with great transitions between each style of music, is “Publichritude of Rotting.” The song begins with a brutal death metal intro, filled with blast beats, fast grooving guitars, and pretty much everything a fan of modern death metal would enjoy. Using a guitar riff layered over the death metal rhythm, the band is able to move into an Immortal-esque section. Following this, using a more colorful riff, the band is able to move into a melody-infused extreme segment. The intro from the song is repeated, and then the black-thrash part comes in again. These three parts are repeated periodically throughout the song and progressive parts are carefully inserted so that the listeners feel as though they are never too far off the beaten paths of the song. This formula of repeated riffs and careful insertion of new parts is repeated throughout the album.

Now you might think that the music on this album becomes repetitive, but I would disagree. The riffs provided by guitarists Juho Matikainen and Juho Räihä are extremely creative and never become boring as they are multi-dimensional and diverse. Vocalist Psycho is able to sing the deepest death metal and also screech as high as any of the black metal greats. His vocal diversity compliments the musical diversity perfectly. The bass work is solid and provides the needed backbone for the crossover style of music. The keyboards also provide the necessary ambiance to accentuate certain elements of the music.

I feel that in two years we will see Gloria Morti atop the crossover metal genre and they will be touring the world with other bands under them. Lifestream Corrosion is a must for any fan of extreme metal.