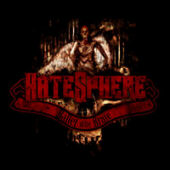 Thrash Metal has certainly made a big comeback in the past years. We saw Destruction reunite; Kreator go back to a harsher sound; Exodus release one hell of a comeback album, and Death Angel surprise everyone with an old school thrash assault. In the meantime a lot of new bands started to become important in the scene. Such is the case with Hatesphere, a Danish outfit who are about to release their third offering in Ballet of the Brute and the result is a very pleasant one. They follow the vein led by The Haunted and some of melodic death bands.

Ballet of the Brute is the band’s follow-up to the outstanding Bloodred Hatred. The production is quite amazing, done once again was by Tommy Hansen at Jailhouse Studios. The drums have more body than on Bloodred Hatred and also the bass this time kills. Overall the sound in Ballet of the Brute has certainly benefited from a more experienced band and producer working in tandem to find a edge in quality that many of their contemporaries are lacking.

The opener "The Beginning and the End" is a neat and extremely heavy intro. "Deathtrip" is a fast thrash attack that states Hatesphere have lost no interest in slowing down. When "Only the Strongest" blasts its way onto the scene it signifies that Hatesphere have approached this track with a crunchier mid-tempo songwriting style.

By now all of you might have come to the realization that Ballet of the Brute is a great modern thrash metal record. It might not be quite as good as Bloodred Hatred, but it surely smokes 90% of the other ‘thrash’ records that will be compared to Ballet of the Brute.