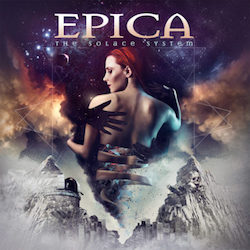 These are tracks that weren't featured on The Holographic Principle. They're still simply awesome, with intelligent lyrics and beautiful orchestrations. If you don't like synthesizers, you won't like this band. Hands down. This EP is rather invigorating and noteworthy. It's incredibly diverse with Simone's epic vocals mixed with harsh voice. The rhythms on here are HEAVY, but there's one song that's entirely acoustic. Simply amazing riffs and vocals. Simone is one of the best female vocalists in METAL today. Some critics may argue that and say maybe Tarja is but I don't think so.

All of the tracks on here are well thought out and meticulous. I like the back and forth clean (Simone) to harsh vocals. My favorite track on here has to be "Wheel of Destiny." But I liked every song on here. They really put their heart and soul into their releases. I don't mind the synthesizers because they seem to augment the vocals quite nicely. They've got an even longer career out there in the METAL scene. If you don't like their music, that's alright. I enjoy their symphonic power metal. They really have a huge part to offer in the metal realm.

Simone's vocals fit perfect with the heavy, but magical music. This is one EP that I overlooked before I checked my collection. I absolutely loved the acoustic track. It's so serene. It fits well with the release. I think they just wanted something to offer than just brutality. Clean vocals galore. Their music is what brings me in about them. They're really a diverse band. The harsh vocals give the music a little more variety to them it isn't all clean. They seem to have it down musically and are able to create leads as well as rhythms that just plain kick ass. Simone's vocals are my favorite though, close to Cristina Scabbia's voice, that's a second one in the female vocal department.

I liked this whole EP, so if you like metal and you're looking for something that isn't too long in length and are willing to try out some symphonic stuff, The Solace System is for you. Keep an open mind when listening to it. They're very intelligent in their lyrics and their music. They hit home here and I'm glad that they were able to roll this over from The Holographic Principle. These songs are totally amazing kind of like how the album is that was previously released. The Solace System is where it’s at! Get this, NOW!