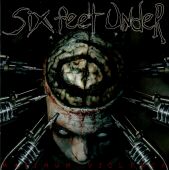 Six Feet Under's first two albums had something cool going on, but it had more wasted potential rather than good musical moments. The band definitely could've come up with some better stuff, but they just filled the albums with contrived songs just to fill up space. If they put more time into the songwriting those albums would've been so much better, but that's not what we got. Thankfully for the first time in their career, this isn't the case at all. Maximum Violence is a new and revamped version of SFU, and this is actually some pretty good stuff.

As I've said before; when Six Feet Under started out they had some good ideas, but they didn't execute them as greatly as they could've, but with Maximum Violence they actually started to give a damn and make their stuff sound more alive and powerful. With an opener like 'Feasting on the Blood of the Insane', you can instantly tell they put more effort into the songwriting. It starts with a spooky-sounding slow riff section with slight wails on both guitar and bass. This part of the song also has a spoken word behind it. Interesting. Then the song comes in hard and heavy, the main riff appears, a catchy and clever drum beat plays along with it, and the bass is also here (you can actually hear the bass being played too) it’s not buried and hidden like most usual death metal releases. Chris' vocals aren't bad either surprisingly, the lyrics on this album are starting to get more creative and in-depth as well. The way Barnes sings in this song is cool, it flows along greatly with the beat of the song. 'Victim of the Paranoid' is a good track as well; catchy as fuck riff, good, visible bass playing, powerful machine gun drums that play away with the riff and also provides some cool patterns and beats throughout the song, and cool vocals that flow good throughout the song. Obviously Barnes' vocals aren't top notch, but on this album they sound decent. The main reason why this album is so good is because the songs aren't all that boring anymore. With Maximum Violence you get nice riffs, more drum variety, and thicker bass. The songwriting skills here are great, every track is listenable, and you'll rarely find yourself getting bored or uninterested while listening to this. All the tracks have something different about themselves. They all start out differently and nothing really is repetitive. Fresh riffs, heavier sound, what could be better for Six Feet Under?

This album is the beginning of their transition from some heavier-sounding death metal-influenced groove metal, to pure "death 'n' roll". The guitars are way heavier, the riffs are better, pretty much everything is heavier compared to the albums prior to this one. Maximum Violence is less groovy than the other stuff, because they started focusing on a heavy sound and less on groovyness. I can say with this record they did a pretty nice job. A revamped and more talented version of SFU. Way more backbone and originality.

This album may be good but that doesn't mean its flawless, which it isn't. Come on, this is Six Feet Under, there's always a flaw in their music, always. The main issue is the sound of the drums. The DRUMMING isn't bad, it’s the sound OF the drums; the drums sound cheap as hell. When you're listening to the first few tracks of the album it’s easy to notice the drums sound cheap and kinda trashy, once you get more into the later tracks of the album it won’t bother you at all anymore. It’s not really that much of a bother in the first place, but it definitely needs to be noticed for the way it sounds. Then the vocals (no shocker here). The vocals aren't BAD, but this is noticeably the start of the downfall of Chris Barnes. The vox aren't terrible, but they aren't that great either. I'm just glad on this record they actually sound good. His vocals fit good with the type of music early Six Feet Under created, but Maximum Violence marks the spot for the beginning of the end of Barnes' vocals.

In conclusion, this is Six Feet Under's first great effort. This is more thought-out, creative, and original. It's not really boring or repetitive at all, this is some quality stuff. This album doesn't deserve nearly much hate as it gets. This is some of the band’s better works, and that's a fact. Give this album more attention and focus less on all the other ones.

Life can be nice with a pretty girl, a good drink and a strong album. But without a pretty girl, without a good drink and only equipped with a work of Six Feet Under, one will probably discover the dark side of life. Okay, let's stay fair. The more or less acceptably produced disc starts in a solid way. "Feasting on the Blood of the Insane" (please ignore the moronic title) combines a sinister groove with a morbid malignancy and Hellhammer greet Grave. Only the polarizing, one-dimensional vocals of Barnes do not give me anything.

However, Maximum Violence is one of these notorious albums that entice the listeners with a fairly proper opener, but the remaining 33 minutes announce the triumph of mediocrity. I am sure that the musicians have the technical abilities it needs to perform interesting songs, but this fact remains their secret as long as they do not compose interesting songs. Some riffs have been heard a thousand times before and the whole guitar work sounds bloodless. The slow pace of many sections is totally boring and, as mentioned before, the ridiculously deep growls fail to add value to the single compositions. SFU have written ugly songs, but they lack dynamic and vehemence, impulsivity and momentum. Surprising or enthralling elements? Don't even think about it. Maybe the cover song of Kiss was meant to set a contrast, but SFU ruin this song completely. The original version from "Creatures of the Night" with its dull riffing is not great, but here the boring essence of the piece shines in full glory. It sounds absolutely powerless and is performed without any inspiration. I almost feel the urge to call Gene Simmons in order to beg forgiveness, but the unbelievably worthless lyrics of the majority of the other songs ("die motherf**ker") paralyses me.

The pieces have no personality, the entire full-length appears as a sticky porridge. Although the group wants to deliver catchy sections, I belong to the lucky people who are able to forget each and every song immediately as soon as the last tone has faded away. I admit that SFU try to vary their approach within the very narrow guidelines of their style. Many tempo changes indicate their ambition to avoid monotony. But this attempt fails. I am not at risk to press the repeat button. Quite the contrary, the longer the album lasts, the more I wish that it comes to an end. These shitty numbers like "Torture Killer" (these stupid titles make me sick) are amateurish and do not even contain the smallest form of a melody. Okay, death metal is generally not known for offering melodic harmonies in abundance, but a necessary minimum should not be forgotten. Yet here it seems to be killed by the Maximum Violence, although this blunt and lackluster work fails to deliver a really violent sound. Compared with the brutality of bands such as Vomitory, the maximum violence of SFU is nothing but a moderate breeze. Give up, dudes, it just makes no sense. And now I need a good drink.