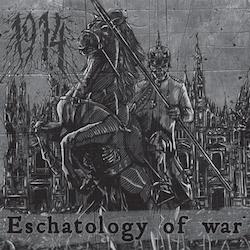 1914 plays a heavy hybrid of death metal that is sometimes merged into the landscapes of black metal. Eschatology of War is an untamed release of puissant drumming and vibrant vocals. It takes the listener on a journey through various periods of World War One (WW1) which began in the year 1914. The listener is placed in the middle of chemical warfare, zeppelin strikes, trench warfare, the terror of high powered machine guns and stories of battle strategies, bravery, heroism, and horror. This release is brutal, haunting and at times even brings tears to the eyes. Yes, this is an emotional album with substance, meaning, passion, aggression, and serenity (the breathless kind). Each song is an accurate representation of the multi-layered intricacies of WW1's mark in history. This is not an album that omits or expels the atrocities of WW1; it bathes the listener in the grandeur of gunpowder and the grotesque effects of mustard gas.

"War In" is a great introduction to the battlefield, which calmly awaits to be moistened with sacrifice. "Gasmask" then charges full throttle with its bayonet mounted rifle into the guts of the listener. The vocals of Dmytro Kumar runneth over with rage; the death metal growls are barbaric and the black metal snarls are savage. The growls are evenly present as the snarls and are both utilized to great effect on the album.

The guitar work by Andrii Rieznikov and Oleksa Fisyuk is phenomenal in terms of melody. It builds on the momentum of the songs. The listener can hear some aspects of deathcore breakdowns on the 2nd track "Gas Mask". I wasn't very fond of this musical choice, even though I do admire and own some deathcore albums. I felt like it affected the overall feeling of the album which had already provided the listener with a strong WW1 atmosphere via means of a classical musical sample; therefore it was only right that whatever followed, maintained the feeling of old, rather than add modernity to it. This sudden transition only lasted for a small period of time, in which I am very grateful for and even better, rarely or never makes a reappearance on the remainder of the album. Deazer's bass is loud and follows the guitar leads for the majority of the album. It is mixed well and serves as that essential touch of vibrancy; thus ensuring the longevity of the album.

The drumming throughout the album is sensational, especially on tracks such as "Verdun", "Caught in the Crossfire" and "Ottoman Rise". Jotunhammer's drumming hits like a stampede of elephants or the thunderous crack of cannons on a battleship. His ability to play black metal blast beats and switch to death/doom metal drumming (e.g "Zeppelin Raids" and "Ottoman Rise") is outstanding.

As a whole, 1914 clearly understands the importance of a quality production and a heavy sound in order to convey the messages they did on Eschatology of War. The album is an excellent mixed bag of melodic riffs, spoken, sung and acted samples, splendid drumming, rich vocals and a clobbering bass tone. I hope Eschatology of War makes its way to vinyl soon; as I truly believe it deserves that touch of wax treatment; given its heavy themes and glorious artwork.