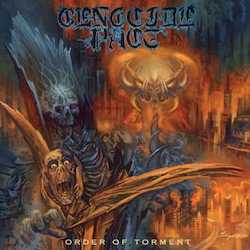 Order of Torment is a straightforward death metal release from Genocide Pact. All of the elements of basic death metal are present on the album. There are very fast and slow sections of the album which aid in keeping the listener engaged and refreshed.

The opening track "Conquered and Disposed" maintains a moderate speed at the beginning, then switches to a doomy guitar and drum combo halfway through the track. The rhythm then goes through various changes in speed; then closes with the fastest section of the song and the album. There is a slight technical aspect of the album, given the sudden changes in rhythm on tracks such as "Spawn of Suffering".

Tim's vocals are strong and vibrant death growls which are maintained throughout the album; they are mixed evenly with the rest of the music. Genocide Pact resides on a very prestigious record label; that being Relapse Records, so one would expect a high standard regarding the overall sound of the album. The guitars, bass and drums complement and follow each other throughout the album, especially on the track "Pain Reprisal". Speaking of "Pain Reprisal"; at the 3:22-minute mark, Genocide Pact nods at Cannibal Corpse's "Hammer Smashed Face"; which I thought was a delightful surprise.

For me, the highlight of the album is the lyrics to the songs, which appear to be tackling issues such as revenge, guilt, hypocrisy and mental torment, attributed towards a deteriorating social infrastructure. I was worried the lyrics would become blatantly political; however, Genocide Pact does well to address politics indirectly. I find the lyrics to be very introspective and thought-provoking. Once I began to read them, they compelled me to analyze and formulate questions within my mind. I'm sure fans of later Death releases such as "Symbolic" and "Individual Thought Patterns" will find Order of Torment to be quite a cognitive treat. Music that keeps the mind constructively active is something needed more than ever before. Given the many provocative incidents that have occurred just over the last decade and mankind's foolish gravitation towards subjectivity; I can surely say that there may be a new paleolithic period within reach; one that is absent of rationale and is purely dominated by instinct.

I enjoyed Order of Torment; I think the album is a worthy extension of Genocide Pact's 2015 release Forged Through Domination. I'm still in the process of debating which of the two albums is better. I am pleased with the effort put forth by Genocide Pact; I'm sure If you enjoy deep death metal vocals and stimulating lyrics, you will definitely find refuge in Order of Torment. The standout tracks, in my opinion, are, "Structural Dissolution", "Authoritarian Impulse" and "Blood Rejection"; they showcase some of the band's strengths in terms of overall musical composition.