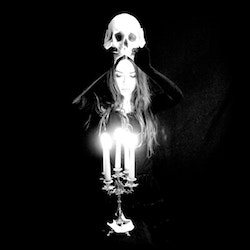 Type: Full-Length
Release Date: December 1st, 2017
Label: Iron Bonehead Productions
Genre: Black
1 Intro - Shadows From The Great Beyond
2 Eternal Wheels Of Life
3 Mystic Schizophrenia
4 Condemned To Death
5 What Waits In The End
6 Before The New Dawn Comes
7 Outro - Through The Chaos Of Voices

The Shadow is a passion-filled release of utter blasphemy and occult mysticism. It has a raw but listenable production and is crammed with haunting melodies. Lilita Arndt, has managed to capture the very essence of hatred and lust, blend them together and place the juices in a capsule of mysterious magnificence. Her vocals are the most passionate I have ever heard, from a new black metal band/project. She strips the veil from the face of compassion for satanic arts and dispels upon the listener, a bare-bones lyrical and vocal sexuality I have only heard of scarcely. The Shadow is a combination of untamed passion, dedication, aggression, and submission, all channeled towards anything within its path.

On "Mystic Schizophrenia" Lilita Arndt ups the atmosphere and accelerates the drumming; this song rams the listener in the face. She is like a seamstress the way in which every burst of anger is conveyed as if it had been stitched into her vocal chords at birth. I don't even know If I can refer to the sounds emitted from her mouth as vocals; they sound more like malevolent cries (not in a DSBM way) begging for the deities to grant her enlightenment. Some of her sung passages sound very heavy/doom metal like; they paint a scenery of a practitioner of adept leveled witchcraft, going through many spiritual phases and states in the quest to attain that which is sought out. What is most striking about the album are the vocals; they sound very sexually driven. She answers Iron Maiden's question clearly; "Can I play with madness?" with a resounding screech and a scrotum snatching snare. On the song "What Waits in The End", Lilita Arndt's vocals are the equivalent of a female Ravn of 1349, on the track "I am Abomination". Every line is pronounced with such fury that one would begin to feel as though she sincerely would like to carry out ill will. Lilita Arndt utters "face to face, eye to eye" in such a seductive fashion that images of passionate tantric sex vividly presented themselves before me. I swear the music on The Shadow induces the kind of sex that empties the testicles of all semen upon ejaculation.

The guitars throughout the album are nothing special in particular; and don't need to be. They perfectly play along as Lilita proficiently guides her wand and spits her envenomed scriptures, causing the listener to salivate as the ritual climbs to its climax. The track "Condemned to Death" is a bit depressive in its overall sound; although I hate dsbm I am going to be forgiving of this, due to the majority of the album being aggressive.

This crepuscular ceremony she plays out surely will captivate and include the listener as a willing participant of unholy astral penetration. This album is going to turn you on, especially if it has been a while since you have pelted forth any water. I am in utter shock at this release; I had no idea such a masterpiece existed. The Shadow by Ieschure is so demanding and aggressive yet comforting and humble. I struggle to find words to describe this exquisite extravaganza; this bewildering bouquet of benevolence and boner breaking brutality. The Shadow is a short but timeless raw occult black metal album. Each song is unique in its own way; the melodies, vocals and lyrics will remain in your head for many days once you have listened to the album thoroughly at least once. The Shadow is a gem that has been lost amongst the vast mediocrity of black metal bands that want to wear corpse paint and appear "trve" to the genre, whilst riding on the notoriety of Darkthrone note for note. Ieschure's The Shadow effortlessly shits on many of the "trve" black metal bands. I hope to see this masterpiece garner more attention and praise as it is worth every bit.