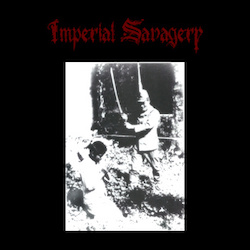 Just when I thought all the danger and violence had long been jettisoned from death metal, a band like Imperial Savagery comes along and kickstarts the genre with all of the same implements and nuances that made it the deadly entropy it had been for many years. Hailing from Chicago, the band pretty much employs the original lineup of local underground legends, CorpseVomit, with Enmortem and Pederasty lineage thrown in for good measure. Imperial Savagery, the debut album, proves these guys have had something special as a unit for many years, and it's once more emerged like a festering wound unable, or unwilling, to heal.

When you think of death metal being this "dirty," sullied medium that only the sickest few would actually entertain, this album is all of that and then some. The vocals via Brice Dalzell are a deep-seated howling that are as disgustingly resonating as they are dangerously enticing. I can't say enough how great these vocals are; the almost echoing effect you hear when he bellows is as pure and honest as it gets. Dalzell's infatuation with the darker, evil side of living has always been one of his hallmarks, and the lyrics herein prove that age has done nothing but strengthen his angry resolve. Backed by guitarist Tom Flanagan, bassist Pat Clancy, and drummer Garrett Scanlan, Imperial Savagery has produced what I honestly feel is one of the ugliest, most brutal death metal albums in recent memory. In a sea of pathetic comebacks where every low-tier DM band feels it's time to resurrect their careers because the proverbial iron is hot, the true underground, gritty and soiled with hateful sweat, is a veritable hotbed of talented individuals saying much in little spaces.

After hearing a rough mix of the album a few months back and playing the CD-R to death, I was pleasantly surprised to get the finished product in my greedy hands and hear how the mixing and mastering put the final touches of brutality all over these songs. These songs are fast-paced ditties so thick with an airy volatility and rife with a sort of organized violence that you will find yourself putting this CD on veritable repeat. There are occasional shots in the arm that metal music is afforded now and again, and it sickens me to see some bands, gone for decades, vying to recapture something they never even had to appease the kiddies who troll eBay and drive up the prices on otherwise forgotten CD's to play in he big sandbox. With Imperial Savagery, you get nothing but unapologetic death with a sincerely brutal edge sorely missing from many peers. Tracks like “His Hollow Hands” and “Sneer the Gift” call on the ideas and visages of religious idolatry and subservience, taking them to task for such wanton disregard for the basic and inherent human condition. After Venom, Bathory and Hellhammer effectively took Satan from the depths of Hell and gave him a face and a theme song or ten, the imagery associated with such evil is no longer the accepted Christian creation. Now Dalzell's lyrics paint a very surreal picture of the evil and hatred dwelling in each of us, devoid of any and all objectivity in relation to the subservient mindset. Imperial Savagery is the perfect band to seek out that which is relevant and honest; when your mind is free, you can take in this album from start to finish and be as haunted and fulfilled as I am each time I hear it.

I've known some of these guys for many years, being from my old neighborhood and holding high that mid-80's flag of metal we so proudly waved in the faces of the Madonna and Bruce Springsteen crowds. It gives me a tremendous sense of pride to know that these guys are so ingrained in the metal underground for all of these years. I don't wish to sound at all condescending when I say I'm proud of them for what they're doing and have accomplished. It goes to prove that if you believe strongly in what you're creating, near perfection can be achieved when you're honest and truly understand the metal movement.