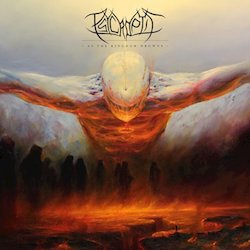 I remember it like it was yesterday, The Isle of Disenchantment had just released, taking the extreme metal community by storm. Here was a band all the way from Australia - and while I’m sure there were other extreme bands from Australia, Psycroptic was in my opinion, the first one to make an actual impact.

Listening to that first album now, then listening to As the Kingdom Drowns is like listening to two entirely different bands. They literally have nothing to do with each other in terms of sound and general approach. While the first two records were both great offerings, it was arguably Symbols of Failure which really put them on the map. Their sound changed from being a raw, technical death metal band, to just being a kick ass death metal band. The following release - Ob(Servant), was huge. A monumental step forward for the band, it was just a collection of kick ass metal which a lot of people seemed to love, and Psycroptic really solidified themselves as one of the big players in the genre.

Then they just kind of disappeared for me.

Sure they were still around, touring and making albums, but The Inherited Repression and even their self-titled 6th album went unnoticed for the most part. Going back and listening to those albums again now, I’m not quite sure why. They both feature great material with fantastic musicianship. Maybe it was only me. My attention was probably focused on other bands.

I wasn’t even aware this album was released in 2018, I just completely missed it. I ran into it not long ago and decided that Psycroptic were a band that at least deserved a proper listen. Right? I mean the guys have been around forever, they’ve been at this for 21 years now. So, it was time reach for some good headphones.

Not sure why I was so stunned by opening track 'We Were the Keepers', but it just felt so damn good. The energy that somehow seemed to be missing from these guys is back, and they’re at it again with full force with tasteful guitar riffs, excellent drumming and completely unexpected vocals in the chorus sections. What the hell is going on? I wasn’t exactly ready for this. The second track then rips through your speakers and your skull, and if you’re not smiling at this point, then you should just turn this off. But goddamn, these guys sound absolutely killer right now. The mix is organic yet still tight as can be, and the energy is just straight through the roof.

I suppose I had sort of written them off in my head, and I apologize for that. Guys, I was wrong for ever doubting you.

Because this stuff is excellent.

While they still sound like themselves (those trademark Joe Haley riffs are still there, completely unique guitar player, dude is totally doing his own thing), they’ve also made some adjustments. This version of the band seems to be more compact, straighter to the point. It’s mostly to do with arranging. In the past, they were never sloppy, but their arrangements were perhaps a bit more challenging. Not so much here - this is more stuff that just grinds and grinds well. I feel that this is yet another big step for the band, their second biggest step, Symbols of Failure being their first. I feel like the band has somehow regained some lost passion, I feel like they’re more focused than they were before.

I must make note of the musicians on here, as it would be criminal not to do so. The Haley brothers (Joe and David) are both renowned, respected musicians, and have been for a long time. So, coming into this album, it would be understandable for you to expect some outstanding guitar playing and drumming, and you wouldn’t be wrong or let down. Joe Haley, while being a respected guitarist, is still a very underrated one in my opinion, which is a shame. More people should know about this guy as his style is pretty unique and he always brings the goods to the table. The last thing you should expect from a Psycroptic album is weak guitar work. It just doesn’t happen. Second, David Haley is still a beast on the drums, no sweat. He’s just getting tighter and better and that’s a bit worrying. The guy sounds like a fleet of panzers. Armed, well oiled, and ready to dominate. There’s so messing around with the drum work, it’s superb. Todd Stern’s bass thankfully isn’t just thrown to the bottom of the mix like so many people are (unfortunately) accustomed to. The bass work is interesting, and it makes the songs gel together well. Those familiar with this band should already be familiar with Jason’s vocals. They’re a bit different from your standard death metal fare, but I quite enjoy them. He fits the music well, and actually knows how to use his voice, as opposed to just providing monotonous yelling.

This album really puts Psycroptic back on the radar for me. I wasn’t expecting it to be this good, but it is, and I am really glad that it is. It’s filled with good musical ideas, good song writing, perfectly decent lyrics and the overall presentation is just very satisfying. Fans of extreme metal, this will not let you down.