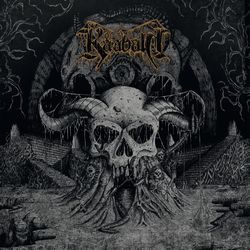 Kåabalh, with their debut full-length album aptly self-titled, takes death metal from its earliest days and refines it with a modern sound all the while keeping the identity of the genre intact. Veterans listeners have heard this type of style a million times over; however, with Kåabalh you get that and a supplementation of black metal and doom metal. The genres are attentively represented by atmospheric guitar tones (in the form of tremolo picking), laden-footed drumming to lay down the foundation for crushing doom and peeping molecules of technical riffs, all done to the addictive tone of the HM-2 pedal. The guitar solos whenever introduced add a flare of elegant grooves that match the flow of the leading riffs, thus aiding the foundation of each song-structure. The vocalist is at work here, his drive to stretch his growling technique as can be heard on "Acheron" brings to mind the likes of Antti Kotiranta on Remnants of Expansion and Mike Erdody on Lords of Death. What really makes each song stand out is the thoughtful manner in which every passage is being handled. With the guitar work exhibiting tip-top levels of competency in terms of technicality, such that when the doom laden grooves appear, the appendix is used as an expanding agent in adding a touch of depth to its assembly.

With songs the likes of Dark Wrath of a New God and Death's Ovation (seemingly the best offerings on Kåabalh) displaying higher levels of assertiveness; the listener gets the impression that Kåabalh is beginning to vaunt their song-writing abilities. This is something I welcome with elation, given this is Kåabalh's debut, and the fact that most bands tend to walk a linear path on their first musical piece, unless it's an avant-garde project. The riffing goes from hulking soundscapes painted, to groovy head-banging passages; then with the flick of the fingers, quick and technical guitar solos that are indeed memorably appealing bounce from the strings into the mind of the listener/s.

Vocally every note is enunciated with a piercing impact and depth that challenges some of the best current growlers of the genre. The stamina built-up and maintained through the entirety of Kåabalh is marvelous, and possessing the first name Damien I would have expected nothing less from this individual. The growls are pivoting and his snarls land harshly, he manipulates the energy in such a way that it can be wholeheartedly felt by the listener.

Matching the devastating vocal ability showcased on Kåabalh, is the drumming, which creates an everlasting imprint of patience, precision and conviction. This performance was ideal and acted as an ushering force the way it remained active in the listener's mind from the start to ending of Kåabalh. Convincingly and steadily playing along with every musical change occurring, much is owed to the drummer for his tempered yet pulverizing approach that is almost mentor-esque.

What really helped the musicianship to shine is the production on Kåabalh. The pitch of each instrument and vocal barked can be heard with the appropriate level of quality, to ensure that there is a high replay factor attached to the record. I hope to hear more from Kåabalh, this recording went unnoticed by many, due to the numerous outstanding releases surrounding it.