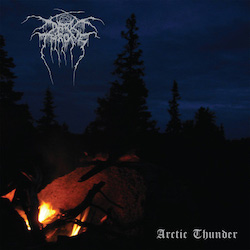 Excuse me, I have a question. I have seen the promotion pictures of Darkthrone that were released with regard to the publication of Arctic Thunder - and they left me disturbed. Sir Fenriz and Mister Culto look exactly as they have already looked ten, fifteen or even more years ago, while I am just getting older day by day. How do they manage this natural challenge? It's simply unfair. By the way, does anybody know where my electric heating pad is?

It gets even better. Darkthrone's music also still has a certain amount of juvenile charm. An adolescent, snotty attitude constitutes the overarching element of the eight songs. Consequently, the production combines rigor and nastiness without flirting with modernity in any way. It meets the standard of the productions of the last Darkthrone albums on an equal footing. By contrast, the songs themselves cover a broader spectrum. For example, the rude opener salutes the listener with the droning riff of "Quintessence", while the second piece scores with the irresistible guitar flow that made the best tracks of "Ravishing Grimness" so fascinating. Finally, the filthy approach of songs like "Graveyard Slut" is still present and shapes the majority of the new tracks. Consequently, the smell of sweaty leather jackets is in my nose.

Yet this is not to say that each and every number works. "Tundra Leech" and, despite its lame fade-out, "Burial Bliss" show their teeth like a rather unfriendly bulldog, but what comes next? Neither "Boreal Fiends", which holds a very strange break that expresses the crude humor of the two musicians, nor "Inbred Vermin" have exciting riffs and dynamic or energy cannot be associated with these relatively uninspired tracks. In principle, fans of high velocity will need time to take this album into their heart. Open-mindedness is required. The pretty erratic duo does not put the focus on fast drum parts and rapid guitars. Darkthrone rather deliver more or less well-hung riffs without being interested in creating a new Transylvanian Hunger. Of course, the metal community did not expect another collection of hyper-fast weapons, but from my point of view, the somehow withdrawn songs of "Arctic Thunder" neglect velocity and fierceness in a somewhat dubious manner. Think back to former curiosities such as "Norway in September", they also did not celebrate the harshest form of black metal. Yet this piece had a somewhat spooky atmosphere. In comparison, the new songs are left empty-handed.

Leaving aside the details, something else is out of question: Darkthrone's integrity. The here presented music seems to be the perfect reflection of the black spots on the souls of the artists. This is one of the very few bands that really does not take the expectation of its fans into consideration. I don't know whether I really like this mindset, but one cannot deny that this speaks for the spiritual independence of the duo. Too bad that the music does not benefit from this approach. I have already mentioned the two lukewarm pieces of the album's first half, but the last three tracks also do not unleash a stormy breeze over the Norwegian fields. To call them faceless might be too strong, but they lack intensity and hooks. In reverse this means that the casualty of the title track's riffs remains an isolated case. I hate to write it, but I cannot hide the fact that I am slightly disappointed. Where is the explosiveness of "The Cult of Goliath"? When did the fatal riffing of "Dead Early" die? Who stole the charm of "Canadian Metal"?

All in all, the seventeenth album delivers a very atmospheric, ingenious cover, but only three strong songs and far too many compositions of average quality. The album title is also slightly irritating, because the musical content is based on the mishmash of Darkthrone's numerous global, not only Scandinavian / Norwegian or "Arctic" influences. However, the most important thing here is exceptionally not the music. You know that I have started with a question; now I end with an urgent request. Fenriz or Nocturno, please send me your recipe for eternal youth! Thanks in advance.