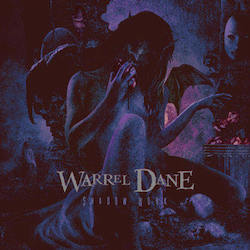 What a solemn experience it is to hear Warrel Dane's final opus, Shadow Work.

We all know Warrel died suddenly last December while recording the vocal tracks for this record, a haunting and sobering reminder of just how fragile and fleeting this plane can be at times. Morose personal lamenting aside, the last album by Dane has dropped into my heavy-hearted lap, so here are my humble opinions.

Shadow Work encompasses all that Warrel Dane had been dealing with in those last months of his life, and, sadly, only in the span of about 42-minutes and change. This work is especially dark, somewhat more evident in the lyrical content, yet no more than it has been in any given Nevermore record. Warrel has always been an open book for the more astute metal listener, so while that's nothing new there is a definitive kinship to be felt with him during this journey. His last album is a perfect exclamation point to his long and storied career.

The overall feel through the album is a real lack of trepidation; it almost seems as if Warrel realized he has nothing left to hide. I'm not all that sure that Warrel could have made this album 25-years ago, let alone five; it's rife with a general gloom that manifests itself in all of the right areas. The album begins with a short track “Ethereal Blessing” that starts out with a certain Middle Easter flavor, only to quickly shift into a very familiar tone for “Madame Satan.” The Jeff Loomis influence on this aforementioned intro was quite evident, intentional or not, but the haunting vocals of both Dane and a female counterpart make the opener a memorable one. Hearing Warrel drift ever slightly into a near death metal growl over the bridge was a rare treat in itself, showcasing a genuine talent for all things vocal that I always knew he had.

While I know Nevermore was behind him in those last years, I can't help but hear a distinct Nevermore influence all over this record. This is especially prevalent in the track, “Disconnection System,” a track that could have easily been slipped into the fray that was Dead Heart in a Dead World or This Godless Endeavor. Again, we have Warrel's attempt at letting us into his mind, however briefly and rife with mixed metaphors, and we are taken quite obediently into the lair of his outlook on the world around him. Lyrically, Dane has always been as honest as a man can be while immersing himself in his inner pain, and that's what made him one of the most important figures in metal history. A track like  “As Fast as the Others” takes you on a sojourn into the area of acceptance and lifts me up in many ways as I listen to it. Hearing about the cruelty of children from our youth will certainly hit home for any fan unfortunate enough to suffer bullying or ostracization. Warrel lets you know you're not alone and defines, ever eloquently, the close-mindedness of the protagonists. Once again, Dane lets us know he's hip to what goes on, for most likely he's been there himself. He was, quite literally, one of the down-trodden, down among the dead men, and he found comfort among us.

As with any given record Dane puts out, the introspection and life-lessons are there for the taking. Shadow Work makes no small footprint in its shorter-than-usual offering, and even though these vocals are “unfinished” templates, the feel and resonance is still prevalent throughout. CM and Warrel's band did one hell of a job putting this piece together for the fans to hear what was going on in Warrel's mind those last months. While I was initially cocked about the idea of the vocal tracks being undervalued band aids on finished music, I was happily surprised at just how easily the obviously blueprinted vocals fit right into the mix, losing nothing by way of emotion or fixated styling. In short, the damn thing came together beautifully!

Shadow Work defines, precisely and intricately, what Warrel Dane has been espousing all of these years: the general dissatisfaction of a world so easily maligned and distracted, so disturbingly weak and docile. He was the voice we all heard crooning about the state of the fragile mind, the diseases of conformity and subservience, and we were often less thankful than we should have been. Warrel Dane spoke for all of us, whether you liked him as a writer and performer or somehow found him slightly obtuse or grandiose. The fact remains that Mr. Dane was, and will always be this sickeningly conformed era's Jim Morrison. He took chances, he put himself out there in the most poetic fashion possible, and he eventually succumbed to the same demons that befell the aforementioned Floridian who pushed buttons as a means to an end. He was a genius in both the literal and musical sense; he embodied a spirit so unwilling to acquiesce and forged his own path through the vehicles of Sanctuary and Nevermore that brought most of us to a higher form of consciousness. Dare I say it was comforting to know a man like him was out there, speaking for us? I will never be as comfortable in life again knowing he's gone, and so goddamned early and unnecessarily. It's not grandeur that makes me offer these words for and about him – it's stark, genuine sorrow that a true artist devoid of camp and trite soliloquy has departed this coil.

Thank you, Warrel Dane, for all of the gifts you shared so effortlessly with me and the rest of the metal world. Heavy metal music never had a stronger, more vocal champion than you, and we may all heed your examples. Your intelligence, your pain, your suffering, your wisdom – I took it all in and it has made me a better man than I was before. If nothing else dare be said about you, know well that my life has forever been changed by your words. I fondly recall you and I embracing after a show in Chicago, 2001, and you thanked me for "making my day with such kind words about my fucked up pain."

I only hope your pains are free now, man. You've earned it.