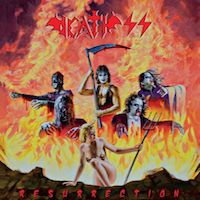 It’s been a long time since Death SS first crossed my ears; I’m guessing it’s been about 25 years. I remember my neighbor dubbing me a tape of some demos and the Evil Metal EP and telling me it was “the Italian Mercyful Fate”. Of course hearing such a comparison both intrigued and excited me. I must have played that tape to death, and I’ll always remember the face of Gary at Kroozin’ Music when I asked if he could give me any info on these guys (pre-Internet, folks!). Well, I’ve seen hits and misses from these guys over that long period of time, and in recent years I’ve been less than impressed, to say the least. Hopefully Resurrection, the band’s newest effort, will stand to pull me in.

In the past few years Steve Sylvester, the main force behind Death SS, has shown some interesting musical directions. Some industrialized metal has surfaced of late with less than resonating results for this writer’s taste, and right off the bat I’m hearing some of the industrial beats seep in over “Revived”; as a fan of this electronic genre myself it leaves me with a bit of mixed emotions when the two. This is not my younger self’s Death SS, but the music itself is pretty exciting and interesting. Almost as if on cue, the next track “The Crimson Shrine” seems to play modern symphonic power metal against traditional early Death SS sounds to a tangible degree. By the time I’m about four songs in I really like the flow of this album, which appears casually unpredictable and extremely well-thought out.

Sylvester’s vocals aren’t as high-ended as they were in the Heavy Demons era of the band, which might be a fine drop in terms of the music’s general style nowadays. There’s a logical aura of the past when he sings, there’s no denying that, but the tone has switched to accommodate time and age. I can’t get over how Death SS manages to combine all of these wicked elements of metal and incorporate them nicely into different songs on Resurrection. Sure, you take a track like “Star in Sight” with its tongue-in-cheek bravado power metal additives and you can certainly taste the modern metal touches, but there’s also a few closely scaled nods to the past there as well. Some of the sound bites and musical “toys” utilized here and there make for a King Diamond-esque record that fans of the theatrical side of the sphere will no doubt find enjoyable. All of the horror and darkened mire associated with Death SS seems to have reared its forlorn head once again.

The album has slow, suffering tracks (“Ogre’s Lullabye”) that lessen the pace of the record just evenly enough so you don’t lose the timing or feel as if the train jumped the proverbial tracks. Then you get “Santa Muerte” with its familiar, yet historically relevant riffs and the mock conceptuality of the record all seems to come together like a nature puzzle on the crowded dining room table. To say I am pleasantly surprised at how good this album turns out to be is a mass understatement. This track also reminds me quite a bit of some modern Alice Cooper, which is always a plus for the theatrical metal to pay homage to such greatness without losing the initial point of the band’s original idea. It all plays out perfectly.

Death SS has itself a very long and legendary career along its trail. When bands grow older, they seem to lose some of that initial spark; it happens, it’s a part of the natural order of things to lose a step or two as we age, no matter the undertaking. That said, Resurrection takes some of the finer elements of metal music, past and present, and stirs the pot to find a very credible and powerful addition to the coveted line. Switching between stylish heavy rock with some flair (“The Devil’s Graal”) to some old school evil with a kick (“Precognition”), Death SS twists the psyche just perfectly. The band re-enters the fray with all of the subtlety of a small Italian village’s street performance of Faust where the audience becomes players in the grand views of Hell. Call it a return to roots, if you will, but it works and it’s great to hear.