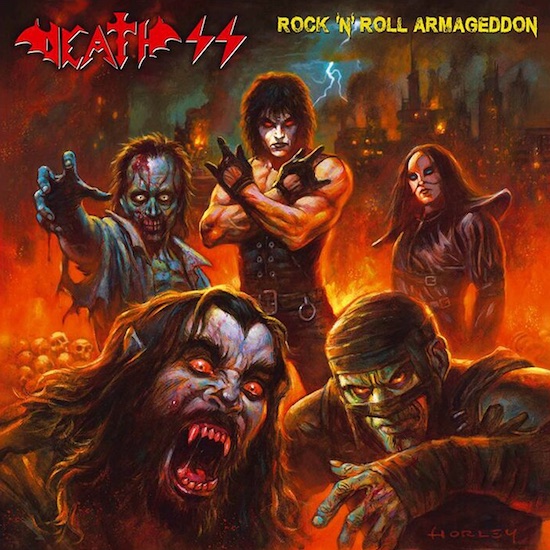 Italy's theater-doom legend Death SS is still alive and kicking after over 40-years on the scene. Often unfairly dubbed the Italian Mercyful Fate (the band actually predates its Danish counterparts by four years), Death SS takes its share of theatrics and stylish heavy metal to interesting and varying degrees. I managed to get my hands on a dubbed tape of the early recordings somewhere back in the mid-80's, and it was hell trying to track down their (at that point) minimal catalog of two demos and an EP. Thanks to the gods for the organic tape trading days and my wonderful Australian friend for sending me that tape!

The latest effort here, Rock 'n' Roll Armageddon, was initially released last September, but due to almost no promotion or pushing it stalled. High Roller Records managed to give it another deserved breath of life, (hopefully) dropping it into more hands this July. Death SS  is a band that never quite got the vast following they deserve, being shadowed by he aforementioned King Diamond band and a bevy of other bands capitulating on the Italian masters' original brand of speedy doom.

Well, here we have Rock 'n' Roll Armageddon, a solid collection of wondrous guitars, gruffly-accentuated vocals, and lyrically encompassing visuals. We have here a generous mixture of heavy metal, rock 'n' roll, and theatre macabre rolled into a pleasant package. The heaviness of Death SS is usually attributed to its storied mainman, Steve Sylvester, and rightfully so. He's an under-credited genius with arrangements and surreal visions, creating some of the most musically diverse epics in the elevated history of the metal underground. The overall flow of the album is one of small mini-soap operas in that each song is a story of its own, making up the cemented whole of the record. Anyone familiar with Steve Sylvester knows full well what he's capable of when creating the albums he offers; the tremendous circus feel of some songs joins ever-so-perfectly with the hard-edged, pure heavy metal pieces and manages to, somehow, expertly tell a larger story within smaller novellas. It's truly an experience to listen to Death SS.

Heavier tracks like “Zombie Massacre,” “Hellish Knights,” and “Promised Land” display the awesome power of the band's vision and expert authorship when crafting these songs. You won't find blinding thrash speed or overtly pounding riffs that shake your stereo (I'm old school, so, yes, I have a component system), but you will find some really memorable guitar parts and vocals that will stay stuck in your head, ala “The Fourth Reich,” a truly heavy metal song in every conceivable facet (and before anyone gets their panties in a proverbial bunch, this has nothing to do with fascism).

Even slight hints of industrial seep into the fray (“Witches' Dance,” a reworked classic) without ruining or diluting the listening experience. Steve Sylvester has toyed with the genre before, much to the misplaced dismay of some fans but the delight of others. He's taken chances here and there throughout his career, and yet he's always managed to remain true to the spirit of metal music. As I said, he's criminally underrated and underappreciated; hopefully this gets rectified soon. Coming near the close of the album, “Your Life is Now” begins rather (un)characteristically with a slower, harmonica-laced intro that segues nicely into an introspective, Dio-sounding classic, leaving a lasting impression with that underlying keyboard resonating in your head. There really isn't a weak track on this album, so color me not surprised.

Overall, Rock 'n' Roll Armageddon offers a casual glimpse into a mad genius' head, as he allows you to take audience within his frame of theater-inspired heavy metal. With Death SS, the bar is usually set high enough to expect the unexpected, revel in the oft-Vaudevillian lyrical pictures, and get lost within the soundscapes of Italy's undervalued metal movement bent on putting your fantasies to music.