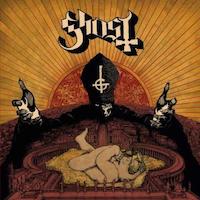 I was one of the people calling out for Ghost to come off the pedestal the hipsters and wagon-jumpers put them atop in some mock subservience to this antiquated sound making a surprising comeback in recent years. The debut in Opus Eponymous was, by all accounts, quite well done in its satanic simplicity, but I did agree with many that it was vastly overrated in many spots. While very engaging in said spots (especially in the raw demo form I hail), it wasn't, in my eyes, this magical piece of musical brilliance. That brings me to the bass-heavy Infestissumam, which is a few good leaps above the debut in both style and presentation. I must be honest and say I do quite enjoy this sophomore effort and have my fork at the ready for massive amounts of crow.

The initial single and its carnival music caused not only rolled my eyes but settled a staunch and ridiculous refusal to even bother with Ghost B.C. after that little foray into the Ringling Brothers area. That aside, along with my insipid opinions, the musical styling on this album is really...fun. I'm not sure Ghost B.C. wants to be taken so seriously, and if they don't it certainly doesn't show in the assemblage of well-crafted, evenly assembled songs herein. They don't go for broke by creating half-assed music to a salivating public still reeling from the first album. This record is a basic foray into parts recently tapped that covets and surpasses its template.

From the very onset, “Per Aspera Ad Inferi” is an impressive jaunt into 1970's progressive rock that adds a sinister feel to an almost carefree aura surrounding the album. Yes, the comparisons with Ghost B.C. and varying 70's masters have been both interesting and widely dramatized over the last 24-months or so, but there is a very strong feel of brilliance masked within the long robes of these guys. With the album moving along nicely and with a severely entertaining pace, the track “Ghuleh / Zombie Queen” slows down the tempo a bit and offers a somber entry into a peaceful respite, only to speed up and hear that Hammond organ sound tap into the room in a warm and welcome embrace. If I concentrate hard enough, I can almost hear slight Ventures influences in the song, a definite surf-like vibe masked in a malevolent tone that isn't easily shaken. I found myself really enjoying the album up to this point.

When “Year Zero” kicked in, the first thought that ran through my mind was the score from the first Omen movie back in 1976. Granted, it's no Jerry Goldsmith piece of orchestral majesty, but the feeling of dismal devilry is apparent and drenches the music oh-so perfectly. The basic galloping riff with the calls to ancient names of evil entities make this one of the best tracks on a wholly great album. I simply love the twisted din that this song provides. With some really bass-heavy production (an intended nuance, I'm sure), this album is a fine tussle once around, and it tends to grow on you after repeated listens. The warmth of the vocals is still one of the driving forces behind Ghost B.C.'s “signature” sound; what amazes and delights me is that a whole new generation might get to understand and know that old 70's feel that we've come to miss when you hit 40 and over. As a fan of the 60's and 70's prog movement, I can cite ten different bands this music draws inspiration from, but for the modern day tracks like “Monstrance Clock”, “Body and Blood” and “Secular Haze” take a distant past and make it readily viable once more, and for that I'm thankful and humbled.

All the songs on this album are really very good, and with my big mouth spouting off about them dismissing Repugnant in favor of hipster music I am verbally quelled; when I'm unwarranted in my bias I'm the first to stand up and admit my idiocy. Ghost B.C. may appeal to a demographic we don't necessarily appreciate or identify with, but that shouldn't take away from otherwise strong music that can reach audiences of all metal genres. If you are inclined to stray from the tempestuousness of extreme metal or the frenzied pace of speed and thrash, you might seek out Ghost B.C. in a completely neutral setting and realize that even we big mouthed know-it-alls can be served our dinners cold when necessary.