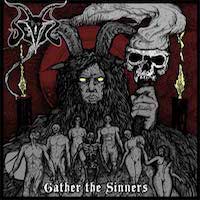 Devil’s Gather the Sinners is the latest album to attempt to grab on to the early 70’s progressive/doom metal that stamped its brand all over the rest of the heavy metal medium with a reckless fury.

After being less than bowled over by the demo CD from these Norwegian doomsters, I sit here and take in the early strains of ancient chords that are so thick the room seems to grow smaller. That familiar buzzing, fuzzy tone that seems to be curiously absent from many contemporary doom efforts is quite the ear-catcher here. There’s a common element when dealing with this doom genre, one that cannot and should not ever be omitted or thinned out, and that is the thick, muddy sensations that overtake the body and mind in one fell swoop of ugly, harassing subjugation. This album has it without bells and whistles ruining the antique vibe along the way.

I will admit the vocals are a bit out of my initial comfort zone, but as the album goes on I grow accustomed to them with relative ease. There’s nothing wrong there per se, it’s just a throaty effort as opposed to a perfectly clean delivery. As I said, they are an easier fit once you hear them for a while. The vital part of Gather the Sinners is that heavy-as-hell management of the songs as individual poetic pontifications and not as some harshly-assembled conglomerate of rehashed chords from any given Blue Cheer or Pentagram record. Even in the slower, acoustic untitled track there’s a solemnity that is both an accepted and well-timed addition to the flow. The other element of the record that is resonating is the simplistic, albeit familiar riffs that are pretty potent and unrelenting without total saturation of the point. There’s almost an L.A. punk feel to some of chords, particularly the rare slower Black Flag sound on later efforts, but by no means is that a complete musical comparison as much as a personal sound affiliation. Devil is doom through and through.

Now, as for the lyrical content…it’s just okay. There are a few clichéd ideas and tired trappings here and there, but there are certainly bands out there making Devil look like Whitman in terms of thoughtful, painted visages. As a fan of the lyrical prowess of any good band, of course I pay close attention to the words, but sometimes it can be an afterthought if the tones are enough to stimulate the mental palate. Sometimes, however, more can be said within the confines of a simpler sentiment than some long, drawn out diatribe, so it’s a matter of personal taste. It doesn’t take away from the overall enjoyment of the record. The production is just modern enough to keep the audiophiles sedated and just thick enough to satiate the old men in corner bars all over the globe that still enjoy this sound filling the local watering hole.

There are many ingredients that mixed well to create this album, and for the most part they all work well. The fans of the secondary ‘waves’ of doom metal should get a kick out of this, as Devil takes a mandatory metal sound out of the dust balls of antiquity and polishes the surface for a new audience of willing and hungry historians. This is a memorable, albeit basic foray backwards that is worth a look-see.