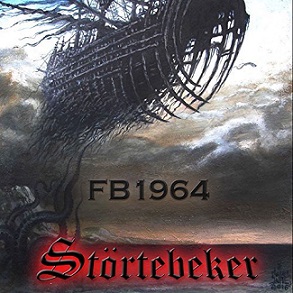 From Germany… we have disk by a band made up of many guest players like Victor Smolski (Almanac, ex-Rage), Jeff Loomis (Arch Enemy, ex-Nevermore), David T. Chastain, Gary Holt (Slayer, Exodus), John Norum (Europe), Nita Strauss (Alice Cooper) and others which is fleshed out as a concept album based on the infamous German pirate, Klaus Störtebeker. Color me curious.

FB 1694 is the musical offspring of one Frank Badenhop, the metallic leader into the concept fray. He has enlisted the help of titanic bassist Mirko Gätje (Headbangers Nightmare) and drummer Michael Wolpers (Running Wild, Victory, ex-Herman Frank) and then added the prementioned list of heavyweight guests.  This might be damn good, me thinks. Clocking in at over an hour, this album is a beast.  Songs like 'Victual Brothers' and 'Gottland'are stand out tracks of power metal mayhem that satisfies even the most jaded of headbangers, and yet coming across the plodding instrumental like 'Hexenkessel' and the dark yet boring 'Mortal Symphony' are some of the handful of tracks that actually do nothing but take up space. Its about a sixty forty split on the disk, where only sixty percent seems to be good- and the rest drag it down into the murk of bordom.

In all, Stortebeker is a good album, but with all of the metal muscle that was brought into the project – it should have been epic as fuck. As it is, its like a pompous virgin- all talk but just lays there and looks good. It od not bad, but just barely.