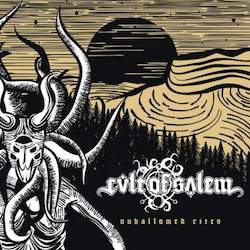 Type: Full-Length
Release Date: September 24th, 2018
Label: Independent
Genre: Death, Doom
1 Rise From Thy Grave
2 Death And Decay
3 Anthem To An Outer God
4 Demon Of The Tomb
5 I Saw The Devil
6 Voice From Below
MetalBite on YouTube

I swear, had it not been for me browsing through Metallum:The Metal Archives (I love this site) latest band additions I probably would have never discovered something so beautiful; and the chances of it showing up in my YouTube feed is extremely high given the band is new and the bigger issue being the nonsense swimming in the YouTube search engine. Cult of Salem!!, firstly what an awesome name for a death metal band, secondly and more importantly, how in the fuck are you guys so talented? This had to have been in the making for at least 5 years; the level of intelligence behind the musical compositions is staggering. I saw the name I slanted my head in curiosity, I clicked on the band link saw the name of their debut album, clicked on that, slanted my head again in suspicion then visited Bandcamp. HOLY FUCKING SHIT!, I'm bedazzled, stunned, intrigued, impressed, immersed and in a state of confusion as to exactly what has trampled through my ears.

This is symphonic/melodic doom/death metal played with a confidence that I have yet to experience since Draconian's Arcane Rain Fell and Abyssic's A Winter's Tale. Unhallowed Rites puts to shame the loads of shite that has been coming out from major labels where this specific genre is concerned. Passionate growling are kissed by strong male clean singing vocals, on a production that punts the guitars and drums through the raw surface of the earth. These 38 minutes pass you by so quickly that you wish the music on Unhallowed Rites had never ended. With so many bands in metal piggy backing off each others sound, lyrical concepts and image you tend to feel exhausted by the overwhelming lack of originality which often leads to a diminishing show of interest in this glorious genre of music we know as metal. Its bands like Cult of Salem that spring hope in an over-crowded, abused scene of mediocrity and arrogance. This is the sort of thing that compels so many passionate enthusiast of the genre to go seeking new bands, because you can never be sure when that one ray of sunlight will peep from behind the cloudy uninspired shadows of not just bands within metal but music as a whole. What we have here is a record that sounds as though it was conceived by a veteran band; for a debut this is stunning, it's what many bands try and fail to achieve in their career as musicians.

'Rise from Thy Grave' greets you upon uncovering the tomb. This track mesmerizing in every sense musically; contrast displayed proudly and proficiently in terms of tempo, vocals and rhythm. It is a continuous building of passion; with every stone placed you can feel the weight of the passion being expressed in the musical tone. Emotions range from frustration, to anger to sadness and desperation. Each emotion is represented on this opening track and hence-forth. The vocal delivery and versatility is the highlight on every song featured on Unhallowed Rites. The clean singing from the onset has a fierce level of confidence, commitment and command. The growls and snarls are of the same attributes; they challenge each other as though at loggerheads over who will be the victor after this journey of portraying what was seen in the afterlife before being revived. You're left in awe at the end of 'Rise from Thy Grave' and in restless pondering of what lies beyond the surface of the introduction. 'Death and Decay' is a firm hand of doom metal being pressed into the music to ensure the atmosphere matches the lyrical content of the record. Atmosphere is something that Cult of Salem accomplishes exceptionally well, the unified manner in which the instruments, vocals and production are put together on 'Anthem to an Outer God' gives the record a deeper more serious air of feelings when expanding on the themes surrounding Unhallowed Rites.

The one element of the album that is most luminous are the different vocal styles used and clean singing. They both carry with them a passionate cry and yearning during the tale. Those vocals reek of wisdom, the kind of wisdom one would come to expect from one that has experienced such an ordeal of succumbing and returning to give an account of the journey beyond the ethereal boundaries. Each vocal note is delivered with a level of precision and passion that the listener almost believes the visions gifted through the music. 'I Saw The Devil' and 'Voice from Below' are such amazing pieces that words would fail shamefully to chronicle. I've listened to the two songs many times; and with each encounter I find more passion seeping through each lyric and instrumental note. It is surreal that a record of such magnitude in terms of vigor actually exists and comes from a band that has no prior releases. Unhallowed Rites cascades like a stream of honey, it is an inescapable journey that will conjure many thoughts and perspectives whilst towing the listener throw the waves of wane.

Cries of the yearning/Fragments of a broken and burdened spirit: