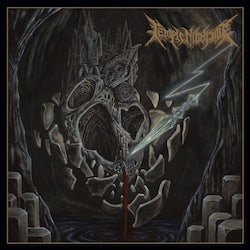 Temple Nightside springed forth from the dusty domains of the old and ancient. Their 2013 full-length debut, Condemnation, was a testament to the rawness of the Australian underground bestial style of necromantic black/death metal. Though The Hecatomb served as my introduction to Temple Nightside, Condemnation was the band’s first full length release. In comparison to The Hecatomb which possessed a very thick and meaty production, Condemnation was void of that and instead summoned an unsettling atmosphere via the sharp raw and dissonant clashing of instruments. After hearing The Hecatomb multiple times, I was eager to give their earlier material my attention and support. I was compelled to pick up The Hecatomb on vinyl, but when it came to Condemnation, I was very hesitant to purchase it whenever made available. In my mind The Hecatomb fulfilled all of my desires at that time and unfairly set the standard for what Temple Nightside should represent as a cooperative unit. The problem being, Condemnation's potential was ruined by a production that did not gratify the effort of Temple Nightside's musical compositions. Instrumentally and vocally the music on Condemnation sounded vile, it was a maze of horrors and cryptology.

As musicians, all departments fulfilled the duties assigned with prestige, but when the production came to fruition one could immediately tell that something went wrong in that area. I don't have a problem with a raw production, but there was something off about the mix. Though I may be entirely wrong, it sounded like Temple Nightside was trying to compensate for the loss in audible depth but did a very poor job. The highs were a bit too high and the lows were almost non-existent at times, thus the inconsistent balance of the mix undermined the dedication that went into creating such a pivotal album. All that on a relatively hazy production matched with distorted guitar work and tremolo picking saw the descent of what was intended for superiority. Though still a solid record where instrumental and vocal competencies are concerned, Condemnation prematurely faded and was almost abandoned and forgotten. Only the stalwarts of the Australian black/death metal scene kept the varmint incubated and breathing until its day of complete convalescence.

It is with much elation I have made the discovery of seeing the entity rise from its period of recovery; revitalized, replenished, resolved and re-condemned. That which was unwillingly spared is now, once again confronted by fear and the imminent threat of decimation. Temple Nightside with the guiding yet inflictive left hand of Iron Bonehead Productions has summoned the will and bravery to revisit the wronged titan and rework his anatomy, breathe new life into the old and in so doing unleash the spleen of the ancients. This re-recording sounds fantastic, it's like a rose has sprung from a pile of ash on desolated and barren land. From the first blow of the horn, “Shrine of the Summon” like a peacock, boasts its new vibrant colors giving announcement of the megalith’s arrival. This is the production quality that the original Condemnation should have been issued with. This drop of blood has served as the awakening of this once dormant specimen. The bass finally makes its presence known and you can finally hear the guitar riffs hence the distortion is noticeably diminished in the mix. Those anguished howls echo louder and sounds denser; and the drum kit being used actually makes a sound when being struck. The best track on the record still is "Exhumation, Miseries Upon Imprecation”, there's something about that groovy breakdown segment that reeks of evil. On this particular track every instrument can be heard much more clearly, it’s like night and day when comparing the audibility of Recondemnatiion when opposed to Condemnation.

For a re-recording of the original release this totally slays. The album sounds fresh, brand new and has an added spark of malevolence. The doomy segments feel more sincere and the death/black metal formula pops out conspicuously. With this re-recording Temple Nightside also took the time to do a cover of Mayhem’s “Life Eternal”. I like Mayhem’s debut full length album and Atilla’s vocals on the track; however, Temple Nightside did such a bloody good job that I’m starting to think of the Aussie version as the superior one. I can't stop playing that track, It’s an excellent cover and definitely the best cover of “Life Eternal” I have ever heard. It would certainly make the band members of Mayhem proud. This re-recording is so well done that I hope they do the same for Prophecies of Malevolence (demo), that would benefit greatly from a musical overhaul. I hope to get the vinyl edition of Recondemnation when it is released. Also I hope the band has material prepared for a brand new album for a future release.

Stench of the ancients exhumed/Revamping the reprehensible: