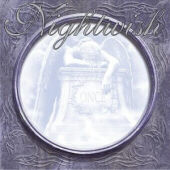 Nightwish deserves an award for outstanding improvement. After two mediocre albums, Nightwish have written a masterpiece of operatic, gothic metal.

Operatic, gothic metal. That’s a rather strange descriptor, I suppose, but it’s appropriate. Once boasts eleven songs with one of Finland’s best mezzo-soprano voices — and, judging by Tarja’s performance here, perhaps one of Europe’s greatest voices, also. Nine songs are accompanied by a full symphony orchestra. Nonetheless, this is still a metal album, structures somewhere between classic metal and progressive experimentation. This is obvious from the opening chord: “Dark Chest of Wonders” explodes with an introduction reminiscent of later Halford-era Judas Priest, driven by energetic drums and choppy guitars. Where’s the operatic part, then? How is that gothic, you ask? Well, that follows shortly, using some of the smoothest transitions in progressive metal. Combine Tarja’s incredible ability to harmonize, the Session Orchestra of London, and a seventeen-member choir, then add in metal guitars, and you can probably imagine it.

Okay, maybe you can’t. This is such an improvement over their last two releases that it really must be heard to be acknowledged. This point cannot be stressed enough: Wishmaster and Century Child hardly even compare to Once. Even Oceanborn, though a slightly different style, is now completely outdone. So many flaws have been ironed out here that the result approaches true perfection. The vocals make perfect use of Tarja’s range, rather than squandering two-thirds of it. Marco’s voice is limited to those couple octaves he can reach, rather than stretching it to the point of mangling songs. All the guitars are distinct, rather than drowned with layered synthesizers. In fact, those cheesy synthesizers that cocked up Century Child are gone, replaced with the orchestra, giving songs a smooth and polished sheen. A slide guitar and a native American flute player both make appropriate appearances. The songs are diverse, the material brilliant, and the arrangement so clever that one hardly notices drastic transitions between individual songs. This is melodic experimentation at its pinnacle.

Ah, but that deserves addressing, too. Not all the songs on this album could be considered “metal.” In fact, several aren’t even close, and one or two are operatic ballads. One can hear touches of everything from Therion to Judas Priest, and Savatage to…well, some of this really reminds me of Grieg and Smetana. I’m sure they tried more for Sibelius, but “Kuolema Tekee Taiteilijan” could have come straight from The Mouldau. Now, bearing that in mind, how’s this for juxtaposition: “Wish I Had an Angel” is a dance floor metal track that would make Rammstein or Cubanate horribly jealous. Better yet, unlike every other metal song written with a techno backbeat, pretty much since the dawn of time, Nightwish doesn’t compromise style or structure for sake of pleasing some capricious clubbers. “Planet Hell” and “Romanticide” are the two heaviest songs, and revive the thrash and power influences last displayed on Oceanborn. The lead-in for the latter could have been written by Metallica, if they had some talent left. Then, on the opposite end of the spectrum, the album’s final tracks are a pair of gorgeous operatic ballads. The heart-wrenching, emotional ballad “Kuolema Tekee Taiteilijan” is a stunningly beautiful, operatic gothic song, featuring just Tarja and the orchestra. It even lacks a guitar.

Now, were Nightwish a lesser band, such diverse songwriting might lend this disc an incoherent feel…such as, say, most of the writing on Century Child. Herein lies a shining example of this band’s improvement: the arrangement of songs, start to finish, is a meisterwerk, structured such that transitions never seem too forced or dissonant. Even within songs, ethereal interludes and melodic bridges from the orchestra sound completely natural. Whereas some bands — hello, Opeth — have this unfortunate habit of just throwing songs together, giving all their albums a haphazard feeling, Once can be heard from beginning to end without one flawed transition. Granted, it’s not completely perfect; there are a handful of interludes that, though they’re faded well, are completely pointless and could have just been deleted. However, strange though it sounds, that is the album’s sole weakness.

Well, perhaps it’s one weakness of three. The second is that Tarja’s voice occasionally shows a bit much aspiration. Most people probably won’t notice this, but it’s detectable on “Planet Hell” and “Dead Gardens”. Third, using an orchestra only makes sense if it’s discernible. Here, in many places, the orchestra gets mixed so far in the background that it sounds like it could’ve been a synthesizer. I have no eloquent description for this: That was kind of stupid, people. Another four decibels higher and this would have been perfection.

That’s all, though. Three extremely minor flaws, eclipsed by a multitude of positives: brilliant writing, incredible talent, excellent arrangement, and amazing sound. Nightwish deserves two awards here; one for outstanding improvement, another for creating such an incomparable magnum opus. With brilliant songwriting, polished production, intelligent content, and an astounding collection of musical talent, Once cannot help but be a masterpiece.