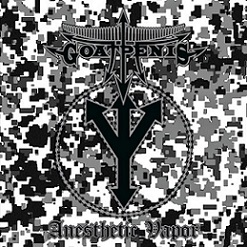 Don't let the name deceive you into thinking this band is some sort of gimmick, Goatpenis are definitely a seriously talented bunch involved in the making of bestial black/death or “war metal” that has a second wave and raw sound mixed with a minuscule touch of melancholy.

Anesthetic Vapor is a swift display of carnivorous vocals, dual hammer drumming and a shrilling guitar and bass combos. Goatpenis’ approach to the genre is very militant, you can definitely hear it throughout the album as the snare drum is pounded relentlessly. Some songs such as the title track and “Krieg Und Frieden” seem to take notes from Marduk (Sweden) judging by the war torn landscapes painted by the technique of the tremolo picking and the tuning of the guitars. Though the focus of this genre is usually that of furious speed, Goatpenis does sway from this formula sparingly in an attempt to give the music a better sense of diversity and originality. This is a good thing as far too often we hear bands repeat the same pattern of one song throughout their album. Though it is important to remain steadfast to the genre, individualism is important to the identity of your music to avoid being bunched with bands that sound similar. What Goatpenis succeed greatly at is managing to blend second wave black metal with bestial black/death metal. There is a great deal of balance taking place when addressing the soundscapes used in the crafting of Anesthetic Vapor, such as the snare blasting, the guitar riffing and those predatory death metal growls used by the vocalist. Those aspects are meticulously constructed, mixed and positioned in a manner that compliments the totality of the militant approach.

Some of the catchiest songs on the album have a very groovy nature that showcases the bands ability to effectively apply sweetly mixed tones of victory, melancholy and militarized musicianship. Examples of this aspect can be heard on the tracks “Front Toward Enemy” and “Pleasant Atrocities March”. Toggling back and forth between fury and forlorn, Goatpenis instills a feeling best describing the aftermath of war and its agitating effect. Many seem to forget that war produces those emotions and it is here Goatpenis excel's marvelously; they tackle the hatred and hostility of war but also remember to include the melancholy usually following the catastrophe. Though I have a reluctant attitude towards melancholic music, I understand why this feature was implemented; and given the overall sound of Anesthetic Vapor being fairly abrasive, the saddening tones are hardly even noticeable and even when identified, the listener can still discern the bestiality. Also present is the sinister overtone by which is reflected in the laughter heard on the album very often. It's quite strange, the more I listen to Anesthetic Vapor the more I begin to appreciate the effort generated and channeled towards the inception of the record. Subtle things can easily be overlooked and lost within the chaos of such music, but if thoughtfully and critically examined one will for sure be able to identify the infinitesimal attributes occurring throughout the 36 minutes of Anesthetic Vapor’s playing time. This Brazilian act surely knows how to intrigue the listener by means versatility. Their approach comes as a surprise to me and a very good one at that, thus compelling me to give their earlier material my attention and money.

The production played a key role in the success of this vaporizing assault. One could say it mirrors a blend of raw, modernly clean mixing and an emphasis on loudness. The pleasure of being able to hear each instrument clear enough to understand its role in the music being played comes as a welcome choice, one that would go on to define not just Goatpenis as a band but also the care and value for their craftsmanship. Many bands choose a viciously raw production and in return the listener is robbed of whatever musical proficiency and delights a particular band may have. Though intentionally done by many, specifically within raw black metal and bestial black metal to achieve an aura of mystery, this effect can negatively boomerang. However, Goatpenis has managed to convey chaos, melody and a bit of melancholy through Anesthetic Vapor without harming the primal structure of bestial black/death metal. Being released in 2017 on Nuclear War Now! Records, I’m surprised much more attention has not been given to this marvel. It is worthy of multiple listens, as I would admit having listened thoroughly to it at least 5 times in one session is a testimony to the record’s replay-ability and therefore longevity within the ever growing bestial black/death metal scene. Grab this on your preferred musical format while it’s still available.