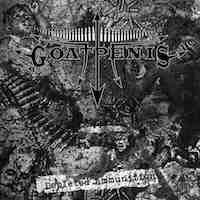 Goatpenis with Depleted Ammunition takes on the same militaristic way of producing war-metal. What I like and then very thing that sets this unit apart from other bands is their use of rhythm occasionally to paint the atmosphere of war before and after. With every release sounding more comprehensive than the prior, Goatpenis demonstrates to the listener that they can indeed make something such as war-metal take on new shades as an addition to its proudly worn features. Like a decorated war-veteran, Goatpenis lives up to the task of delivering a victorious blow to the base of the enemy territories. Their musical tactics never fall short of satisfactory, all through the blasting-away and tremolo-picking melodies, the fatiguing pulse of high intensity war-metal stands its ground firmly like an elite soldier amidst the threat of seismic-blast. From naming the songs after military grade weaponry, to including short samples from movies, Goatpenis glorifies the hostile nature of either being a part of an infantry platoon or a soldier behind a manned piece of devastating military machinery.

The war-head sounds the bells of disaster and Goatpenis begin their mission with “FROG - 7 Missiles”, a power-shell packed with commanding vocals, the barbaric guitar attack commonly heard on their albums and artillery filled with demolishing blast-beats. As being one of the longer songs on Depleted Ammunition, there's quite a bit supplied in terms of melody, groove and the traditional detonation of the snare drum. The following 3 tracks are fairly standard offerings by Goatpenis’ level, they're short and quick to the punch in the lead-up to “MGM-29 Sergeant”. Again, these titles are totally sick; I researched the MGM-29 and its listed as “short range, surface-to-surface missile” that weighs 5 tons and can be fired between the ranges of 75-84 miles; scary stuff. I can imagine the military rolling out such weaponry with this playing in the background; the leading guitar builds that tension of watching something of such a catastrophic scale occupy the spotlight in war. The musicianship here takes a more rhythmic yet aggressive chance in tonality; blast beats and ripping guitar riffs snatch the center stage of this crushing march.

Depleted Ammunition is primarily guitar driven, though the drumming has its moments as on “MGM-5 Corporal”, “Potentially Weaponizable CLGG” and “Combustion Light Gas Gun CLGG”. The makeup of the drumming on those tracks are as fiery as you would imagine judging by the titles. They’re low in the mix hence the dominating guitars but are played loud enough and competently to have a reverberating impact. There’s just enough bass to be heard, with the guitars handling its duties in a dignified fashion, and the vocals blasting out chunky growls and commands, it's understandable why the bass is somewhat low in the mix, like a soldier providing ammo support for his unit.

Goatpenis is one of the more conscious bands residing under the war-metal banner. I say this due to the musicians being able to bolster a violent tempo regardless of the slightly groovy segments existing on their recordings. Many bands go for the traditional full-blown turbulence, which is fine by me, but that added touch of rhythmic direction works to the strength of Goatpenis. Such can be heard on the final track “Combustion Light Gas Gun CLGG”, which is by far the most rhythm driven track to be heard on Depleted Ammunition. It’s such a great extension to the music that I don't mind it at all, it never gives off a weak impression.

Definitely some stellar stuff on Depleted Ammunition, can’t go wrong with Goatpenis, they’ve been firing the tanks since 1992; no question of experience there.