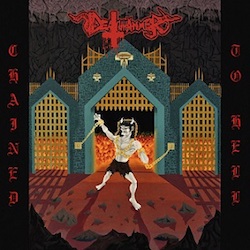 I am 50 years old (f**k), but I have never seen a cheaper artwork and, adding insult to injury, the overall impression of the package is absolutely miserable. It's usually irrelevant, but a completely white insert page just sucks. Black thrash metal must deliver a proper dose of dirt instead of virginal white. But okay, this is the only innocent detail that Chained to Hell holds. Hell's Headbangers is not known for lukewarm or flattering publications and the two Norwegians with the aura of confusingly living corpses love to throw with filth consistently until everything and everyone is covered with mud. Isn't it fantastic to become witness of this kind of hyperactivity? Rasping guitars create malicious riffs, the drum kit will sue the duo due to bodily injury and the vocal cords have been ready for scrapping after the recordings. No wonder that the so-called lead singer needed a break - "Into the Burning Pentagram" enriches the rare species of black thrash instrumentals. It covers the entire range from a nearly cautious intro over Maiden-esque lines to eerie riffs which have been stolen from King Diamond's drawer with the label "too heavy" (and the King still believes that it was a ghost who took it...) A very good piece, but with regard to its quite atmospheric undertone no representative track.

The typical songs on Chained to Hell convey pure energy, aggression and ruthlessness. Useless intros or intermezzos do not appear. Deathhammer prefer a compact full-length with a playtime of less than 32 minutes. The here presented inferno does not offer an exit, the listener is more or less condemned to hear this superbly flowing album from the beginning to the end. That's great, because Deathhammer still make music, not just pure noise. This means they intersperse a sufficient number of weird and devilish melodies without affecting the harsh overall picture. Furthermore, they present a very direct approach, but the song structures are not primitive. Of course, black thrash has never been the sonic status symbol for academic eggheads and Chained to Hell does not intend to change this situation. Nevertheless, one finds a lot of ideas in each and every song, tempo changes as well as a relatively big number of riffs. Even the solos make sense and avoid pure noise, just listen to that of "Threshold of Doom". Black thrash may be the natural enemy of maturity, but sometimes the inevitably growing experience of the protagonists is not at the expense of their juvenile recklessness and exactly that's the trump card of the fourth full-length of the Scandinavians. They do not offer "Barbaric Onslaughts" anymore, but their vehemence is still impressive. Those of you who love Norwegian black thrash, combos like Condor, Aura Noir or Nekromantheon, cannot go wrong when it comes to the here reviewed work. Especially an album like "Rise, Vulcan Spectre" seems to be a very close relative of Chained to Hell. However, I think Deathhammer are one step ahead in terms of quality.

The eight harbingers of hell have no unique characteristics, but honestly speaking, this is what I like. I don't want to listen to songs that are diluted by "individual" components of self-reflective artists or self-declared musical cross-border commuters. The day Anthrax began to mix thrash metal with different and completely useless styles still has a traumatic effect on me. I like black metal for what it was meant to be, I enjoy thrash metal in its pure form and it is only logical that I don't want to be surprised by a mix of black thrash and philosophical, progressive or moralizing elements. I want to feel the characteristic fury, misanthropy and dynamic of the bastard genre and Deathhammer do not hesitate to offer exactly these features. So, put on your old, stinky leather jacket, ignore the fact that you have lost your last hair ten years ago and bang your head. Maybe you are able to identify highlights on this beastly work, I have failed in this respect. In my humble opinion, every song hits the mark and even though the snare sound very dull, the album is aptly produced. With that said, it comes as no surprise that Chained to Hell cements the reputation of Norway as one of the most fertile countries in terms of black thrash. Hell's Headbangers decision to sign Deathhammer was a very good one, but please stop releasing CDs with a white insert page.

Being new to Deathhammer and finding out they have been supplying the underground with scorching anthems of speed since 2006 has elevated my desire to visit their older material since having the opportunity to hear Chained To Hell, which is the band’s 4th full-length album. Hells HeadBangers have been releasing some of the wildest underground metal for a while and this one is certainly apart of their catalog of commotion. Playing fast with addicting guitar leads and solos is the one thing Deathhammer knows how to do plausibly on Chained To Hell; yes there are occasional changes in rhythmic patterns and tempo shifts but the majority of the record is drenched in scampering swiftness. From the opener "Rabid Maniac Force" to the final track, "Evil", Deathhammer let-loose a zoo of reckless species, each possessing a signature attack that is both devastating and incisive.

If you’re a fan of speed metal that sounds as though it was initially recorded in a garage then mastered at a studio but maintained a raw feral sound then this is the album for you. Spanning only 31 minutes in length, Chained To Hell is a riff filled, drum blasting, vocal pit of pure speed metal chaos. Most of the songs are 4 to 5 minutes in length and are frenziedly played but orderly composed. I recall "Evil" starting out as a quick, slick attack then slowly diverting into doom metal towards the latter section of the song; which served as a showing of Deathhammer’s ability to add versatility to the music. Playing fast consistently can create some amount of monotony, but if small changes and shifts are made during the run-time, it usually helps in keeping the attention of most listeners.

The production on Chained To Hell sounds thick but with a very minute amount of bass being heard. The lead guitars do what they are meant to do on a speed metal record and that’s lead; they sound very good with an adequate level of tuning applied to give the music the right balance. The riffs on Chained To Hell are fiery and hit admirably. The drumming is well paced and has a slightly sloppy feeling that works to Deathhammer’s advantage on the record. The vocals are frequently varied like a maniac and keeps the music eccentric. The mid toned growls, barks and exclaimed shrieks are fun to hear, they really shine on the track “Black Speed Inferno”. Chained To Hell is definitely one of those albums that will have a dominating effect on the speed metal world; it’s an album that has been well thought out and executed. If you’re a fan of the raw primal side of speed metal, then this is the record for you; tracks like “Rabid Maniac Force”, “Black Speed Inferno”, “Threshold of Doom” and “Chained to Hell” will have  Chained To Hell chained to your turntable for weeks.

Maniacs of the breakout: