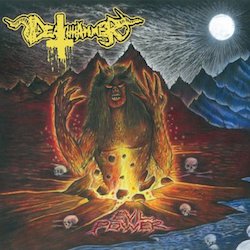 I like sonic ugliness, but I am no great fan of ugly artworks and Evil Power almost corrodes my retina. It's a cold comfort that Onward to the Pit from 2012 also suffered from this defect. Yet we all know that the visual aspect is not crucial for the value of an album. Moreover, we cannot exclude that the guy who painted this crude picture was listening to the material of Evil Power while doing his job. This could explain the ludicrous result, because the songs deserve the full attention of the listener - at the expense of other things.

This speculation aside, Deathhammer give the black thrash horde what it demands for. The Norwegians perform this bastard style in a skillful way, and one finds all elements that make this sub-genre so fascinating. Wild and rebellious riffing, very fast rhythms, a moldy smell which is caused by a pile of dirt and stereotyped lyrics ("Make way for total death / Armageddon is unleashed in all its glory") that are performed by a lead vocalist whose hoarse voice sounds like cracking glass. At least his high-pitched screams feed this imagination. Sometimes I fear that this barking and yelling dude will collapse from exhaustion, but, reassuring to know, it does not happen. Nevertheless, I am sure that his ill-treated vocal chords will die 20 years before the rest of the dude leaves this world.

I have mentioned the speedy approach, but bastards from the top of Europe have not forgotten to vary the tempo. Every now and then, they take pleasure in presenting some mid-tempo sections. "Sinner's Possession" relies on a slightly less speed-oriented approach, but this does not mean that it falls by the wayside. Instead, its casual guitars build the bridge to rather traditionally acting metal hordes. Anyway, all eight songs are more or less on the same level, even though I understand why they chose "Warriors of Evil" to open the full-length. It offers a fine combination of pretty jagged riffs and rather smoothly flowing lines.

The production can be praised for its directness. Although the grim songs are a little bit more complex than those of a lot of Deathhammer's black thrashing competitors, "Omen of the Beast" is nearly an epic number in terms of blackened thrash, "Evil Power" takes the shortest way in order to capture the attention of the audience. It is therefore slightly sad that it takes some time until parts of the album keep sticking in my mind. Even a relatively catchy chorus like that of "Satan Is Back" needs several attempts (or my rotting brain cells play a trick on me). However, the compositions deliver a proper load of hatred, insanity and filth. They are raucous and turbulent, but never too hectic. Only an instrumental section of "Belial's Curse" borders on chaos due to hyper-fast and nervous guitars. Nevertheless, my recommendation is to lend an ear. Fans of Nocturnal Breed or Aura Noir will not be disappointed, to say the least.