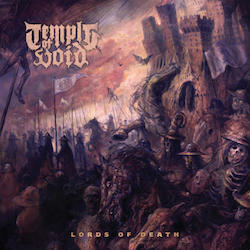 After my experience with Temple of Void’s Of Terror and the Supernatural I just had to get my hands on the vinyl version, but unfortunately at the time of discovery it had already been sold out on most major distros and I wasn’t prepared to mess with discogs. However, it was that same time in which I found out a new Temple of Void record was nearing release so I wasted no time in trying to acquire a vinyl copy of their latest chapter. What I love so much about Of Terror and the Supernatural is the vibe it emitted. The music matched the artwork and the theme. It brought the artwork to life, I could imagine the scenario taking place on the cover’s depiction. The eerie feeling I was getting from the artwork was also transmitted from the music played; “Beyond the Ultimate”, “Rot in Solitude” and “Bargain in Death” are such creditworthy songs that it was near impossible for me to pass up on the record. Not forgetting the length of the tunes, though exceeding 5 minutes each, they kept me engaged in questioning what technique would be used next as a bedlam of fury was churned. Temple of Void uses different patterns of playing to keep things interesting but mainly to compliment the thesis

On Lords of Death the same formula is applied diligently, the war torn portrait is marvelous; kudos to the artist responsible. I admire the light and deep tones of purple used to translate loss, conquest and the atrocity of war; as for the music, it walks the same path of the artwork. What is immediately made noticeable is the production on Lords of Death, compared to Of Terror and the Supernatural the mix is louder, deeper and cleaner (more on the production later). It’s a bombastic record from start to finish and the opening tracks display what is to be expected throughout, but does not ruin the little surprises to be uncovered. Also Lords of Death is a shorter record than the previous, its 36 minute playing time goes by even faster due to the effective musicianship. The leading riffs facilitate expansion, thus the guitar solos act as extensions of the primary rhythm. That is key to creating a piece that has instrumental substance and depth hence it conjoins the lyrical and artistic themes. Just as the aforementioned is harmonized, the flow of the music is also important, Temple of Void succeeds here as well. From “The Charnel Unearthing” to “Deceiver in the Shadows”, the tracks between feel connected because the preceding bleeds into the succeeding.

Credit must be bestowed upon the production of Lords of Death, it gives a good representation of the crushing wrath of battles fought long ago. “Wretched Banquet” is one of the tracks that sounds obliterating thanks to this crushing production and more so the slow, grinding, groovy momentum of the music. Temple of Void’s playing style matched with the production resurrected some Bolt Thrower memories of when I first heard the IVth Crusade. The pace of the record quickens on some tracks but the heaviness of the sound remains the same. Majority of the songs on the record are mid paced; this keeps a destructive and deteriorating feeling throughout the run-time of Lords of Death. The closing track "Deceiver in the Shadows" is a great way to finalize the kill, its so thick with chugs and slowly squeezed and wrung riffs, I could imagine someone being impaled then having the spear slowly pulled from the wound. The album feels like a play on physical punishment; Temple of Void really put on a killer performance here, every cent of my vinyl purchase was worth it and I still discover value with each playing session of Lords of Death.

Atrocities bellowing from the grave: