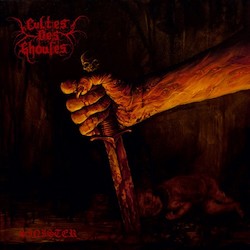 Cultes Des Ghoules approaches the altar again, this time to confess the many crimes they have carried out on their latest criminal season of sorcery. If you thought Henbane was a masterpiece then I don't know what words of praise you will be able to justly attach to Sinister, or Treading the Darker Paths. This is a total nightmare occurring within the shadows of the occult. Currently this "sinister" Cultes Des Ghoules release joins my top albums of the year which is a very small list of exceptional 2018 releases. Listen to the sounds of the serpents as they hiss from the tunnels below. Being able to cement your status within the underground and keep relevance 13 years later is not an easy task. Some bands release a few demos an ep and then suddenly leave because of life matters or to perform duties in other bands, thus causing the project to fade with time. Whilst others struggle to find their place whilst putting out releases as fast as Mcdonald's prepares a burger. Cultes Des Ghoules has remained active and relevant by releasing albums that have evolved in time, with each new entry being added to their collection of prominent transgressions, showcasing greater musical understanding and improvement without sacrificing their foundation.

This contaminating touch of evil opens with some kind of chanting over a repeating guitar chord backed by a single drum flow. Like a vile tale of terror it closes with what sounds like a proclamation. Strangely enough, 'The Woods of Power' opens up similarly to that of something I've heard before by a popular band (I don't want to mention the name but I think most will recognize it once heard) then changes its tempo (and there's much of that happening on this record). More vocal tuning if you will are inserted with humming and agonized screams. Then comes Cultes Des Ghoules clawing from the grave with 2nd wave black metal drumming that fades into first wave bestial war metal snare pounding. The vocals here sound wretched now, like a witch (the one with the pointed hat, crooked nose and pimpled-out face) and don't have any specific line of flow, its words pelted hatefully and hysterically from a necromancer that is pissed-off his only wand broke, plus he forgot to collect a frog from the lake 10 miles away to add to the cauldron of spells (that's a shitty day). Suddenly one of the most egregious riffs jumps out of the boiling kettle to play with the unexpected change in drumming. That riff is superb, the way it pounces on you without warning keeps you hanging on the edge of every note in anticipation of more surprises (and there are plenty more, but I won't reveal them). 'Day of Joy' continues along the same path (guess who got an new favorite wand and a box of tadpoles for Samhain); the madness is elevated, thrash metal/punk drumming intertwine with each other to initiate the celebration; more tempo changes ride the ferocious HM2 pedal effects in the background, the bass receives brief moments within the spotlight amidst the frenzied barking and rambunctious clashing of vocals, drums and guitars. Approaching the end, 'Day of Joy' wanes into the groove of doom metal bringing a calm closure to the excitement of the jamboree. The remaining tracks continue the momentum flawlessly, they occupied any gaps I thought may have needed representation. 'Where the Rainbow Ends' is the peak of lunacy and pandemonium expressed on Sinister, or Treading the Darker Paths; by the title of the track all I can say is expect a grandeur denouement.

For a record that has so much going on musically, much credit must be bestowed upon those responsible for the mixing and mastering of Sinister, or Treading the Darker Paths, every instrument can be heard clearly and there are no clumsy sections on any particular entry where you experience disharmony or sudden drowning and popping in sound; balance is given much emphasis on Sinister, or Treading the Darker Paths where the production is concerned and one would expect no-less coming from legends such as Cultes Des Ghoules. The artwork is a pleasing piece, I saw the t-shirt representation on sale at Hells Headbangers and immediately felt as though I needed it. Currently Sinister, or Treading the Darker Paths poses a threat to the records in my top 10 of 2018 and is gaining positions with every listen. This practice by Cultes Des Ghoules is arguably their best, they are certainly one of the bands that has the best interest of the underground at heart.

The pleasures of evil/sins pouring from the cauldron: