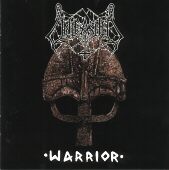 Type: Full-Length
Release Date: 1997
Label: Century Media Records
Genre: Death
1 Warmachine
2 In Hellfire
3 Mediawhore
4 Down Under Ground
5 My Life For You
6 Death Metal Victory
7 Hero Of The Land
8 Longt Nid
9 Born Deranged
10 I Have Returned
11 Ragnarok
12 Your Pain My Gain
13 The End

My heroic quartet of Swedish death metal pioneers consists of Entombed, Dismember, Grave and Unleashed and if I had to select the most likeable, my choice would be clear. Unleashed has always been the most authentic formation. The vast majority of their albums blow the shit out of the microscopic place called my brain. But Warrior practices the opposite. It delivers a portion of shit in order to fill the hollow spaces of my head with the muddy excrements of the Swedes.

Already the predecessor of Warrior had some unexpectedly weak songs, yet the here reviewed work is much worse still. One-tone riffs, mostly offered at a snail's pace, do not deliver any idea in order to form interesting songs. Uninspired, lame and insubstantial are the words that come to mind when listening to this crummy stuff. For example, the opener 'Warmachine' sucks completely. With a length of less than two minutes and a variety of less than two tones, it gives rise to many questions. Who said that this song is finished? Why was it recorded? Who was the outsider that chose exactly this pale piece for the opener? Mankind will never know the answers.

Overly primitive structures are not a crucial disadvantage, but they need to go hand in hand with a furious, rapid and vehement approach. But songs like 'Hero Of The Land' are bloodless, without energy and belligerence. Their melodic fragments are not enough to lend them an individual face. This is all just bullshit in its more or less purest form. Ironically, exactly the keyboard-based intro of 'Löngt Nid' pricks up the listener's ear, but everything falls flat as the guitar sets in. A boring instrumental is the miserable outcome. By the way, Unleashed was never a group that scored with technical skills. Therefore, I cannot understand the decision to integrate a (comparatively long) instrumental, because it shows the weak side of the band in relentless openness.

From time to time, the obviously confused band gets back on its feet and intensifies the tempo ('Mediawhore', 'Born Deranged', the title track). Too bad that the lack of substance remains regardless of the chosen pace. Of course, 'Born Deranged' is more acceptable than anti-songs like 'I Have Returned' with its baggy guitars or 'Ragnarök' which seems to be recorded in slow motion. But especially 'Mediawhore' has nothing to offer but a predictable, one-dimensional structure and mediocre leads. Is this really the death squadron that gave us precious metals like 'Before The Creation Of Time', 'Onward Into Countless Battles' or 'To Asgaard We Fly'?

With regard to the egregiously meaningless song material, I am not willing to talk about the production. One can record this kind of tunes with the latest technology and one can equip them with the scent of strawberries - the result will always suck. Yet if somebody points a gun at me in order to hear my opinion about the mix of Warrior, then I can frankly say that it sucks as well. Unleashed present a comatose death metal sound without any lively details. I still wonder that the band survived this disastrous publication.