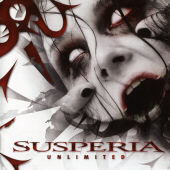 It’s taken ‘em 2 records, but finally album number 3 sees Susperia decisively stamp their own name on the metal world. Let’s face it, both Predominance and Vindication were good records, but were ultimately met with mixed reactions from fans and media alike. Why? Susperia were yet to come into their own. Predominance was comprised of some good songwriting, yet never quite hit the blend of thrash with the ‘black’ metal influences. Vindication, on the other hand, was certainly more of a full thrash record, but was marred because it was largely forgettable once you got to the middle of the album.

Unlimited is 2004’s follow up to Vindication, and obliterates both preceding records in every facet. Black metal is so far gone from the Susperia sound it’s not even funny anymore. And thank all hell for this, as Susperia might finally be able to move out of the shadow created by drummer Tjodalv’s former band in Dimmu Borgir. No more black metal equals no more weak comparison.

Where I see the biggest improvements of Susperia circa Unlimited compared to Susperia circa Vindication is definitely in vocalist Athera. His voice has not undergone a transformation as such, but more of a refinement, which has successfully forged him into a complete vocalist that is more suited to handle different types of pitch, range etc, etc. Of course, this is not to say the rest of the band hasn’t improved, because this could not be further from the truth. The drumming from Tjodalv is just as varied and explosive as ever, while the rest of the lads provide a fresh assault in thick guitar work.

Second to Athera’s vocal consolidation, is the huge leap that has been taken in the production aspect of Unlimited. The sound that Susperia have got now is spot on. The guitars, for example, are meaty and provide a relentless attack through each of the ten tracks. However, what really sticks out for me is that the production is not completely crystal clear, but has a slightly dirty feel to it, making for a ‘rougher’ album than the last two. Fortunately this pays off as Susperia have really nailed their sound down for Unlimited.

I’ll be the first to admit that I wasn’t holding out high hopes for Unlimited. I was impressed by Predominance - the hybrid mix was cool, but it was an album that was a little blurry. Vindication was a disappointment for me; two or three cool tracks, but it didn’t have the staying power of other records around. So coming into Unlimited I was expecting just another record… but I’m more than happy to be blown out of the water.

2004 looks like a very solid year for the revival of thrash, we’ve already seen Death Angel and Exodus make some welcome returns to the big time, and now Susperia have arrived with Unlimited to inject some European flavor into the mix. This is the album fans have been waiting for. This is the record that Susperia have hinted at creating in the last two releases… we’ve only seen glimpses up until now, but finally we get the real deal with Unlimited.