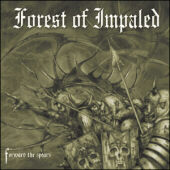 Out of Chicago comes one of 2003’s most aggressive, if not the most aggressive record of the year. Forest of Impaled is the band and Forward the Spears the record. A quick scan down the back of the record and you’re presented with some fairly ominous track titles. "Hand of Vengeance" and "The Call of Death’s Dark Horn" being two prime examples. One can assume death metal or a hybrid mix of death/black, and you’d be more or less right…

I think its something of an art to actually create music that matches up to the lyrical content and/or artist’s image. Power metal is one such misnomer in the metal world. Heaps of these bands successfully create some pretty interesting songs titles with the lyrics to go alongside them. All looks good until you put on the record and realize that the lyrics and topics that they are "singing" about are played to the tune of overblown keyboards and saturated with teenage boy vocals. To get to my point, Forest of Impaled can back up the concept they are pushing – that being war, death, anger and hatred.

Furious riffs, black screams, death roars, all helped along by an adrenaline injected drumming job spell out what Forward the Spears is all about. This record does not let up for the entire 40 minute duration. No shitty samples, no acoustic interludes, no female choir sections. None of this crap. Pure blackened death thrash that concerns itself with hatred, aggression and death. War metal.