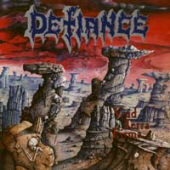 Void Terra Firma is one of the better albums of Oakland's Defiance, but that doesn't mean a lot. Defiance were never ahead of the pack and even the proverb that every dog has its day is not applicable in this case. The compositional talent of the dudes was not good enough to pen a really great album and even the here presented output does not have any kind of long-term impact.

Okay, the mid-harsh thrash has its moments. Especially the first half of the album delivers pretty strong tracks. Both the sinister, pretty aggressive "Deception of Faith" and the slightly emotional "Questions" with its short melodic parts are decent, although they cannot compete with highlights of comparable bands such as Testament. The hoarse and almost awkward voice of Steev Esquivel constitutes another negative discrepancy from the works of the better-known formations. He ruins songs such as "Slayground" with his shrill cries at the beginning in a matter of seconds and it is of little consolation that a better lead vocalist would not have saved the lackluster number as well. A mere juxtaposition of mediocre riffs leads, and lines has never shaped a great song.

In search of a really great number (and in view of their own limitations), the dudes decided to cover "Killers". To be honest, I never was a fan of this Iron Maiden classic, but the absolutely powerless version of Defiance takes the biscuit. Once again, Steev shows that he is not the natural born lead vocalist. And apart from his pretty miserable performance, there are no significant differences to the original version of the song. Thus, I really do not have a clue why the band recorded this piece.

The following tracks give the answer. "Steamroller" suffers from extremely weak riffs. "Checkmate" has a promising start in view of its dark vibes, but the faceless one-tone-chorus sucks. Thrash metal is usually appreciated for its precise velocity, its sharp riffs and its dynamic overall impression, but despite a sufficient number of breaks and tempo changes, many songs lack of energetic momentum. "Buried or Burned" marks one of the rare exceptions. Its speedy parts ban the compositional disorientation that shimmers through many songs and the abrasive guitar work gives me the thrashing feeling that I like so much. The solid production is able to put this track into the right light.

Anyway, it was no coincidence that Defiance's name was never mentioned in the same breath as Forbidden, Vio-lence or further comparable groups. These bands really were, at least for a certain period, ahead of the pack. Defiance followed the horde without even smelling the farts of the leaders. The distance was just too great and already the first track mirrored the situation perfectly. An opening title track has to meet highest demands, but Void Terra Firma fails to exceed an acceptable level.