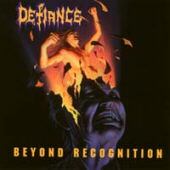 I am really surprised to see all the reviews with excellent ratings for “Beyond Recognition”. As much as I regret it, I cannot share this point of view. In my humble opinion, Defiance never gained a seat in the front row of thrash metal. On their third album, they appeared like a bad copy of Testament. “Step Back”, an unintentionally honest title after the acceptable debut and “Void Terra Firma”, shows the influence of the legacy administrators in an obvious way. Adding insult to injury, Defiance were – of course – not able to fight against the zeitgeist successfully. Guess we cannot expect this from a band that always followed the role models. Therefore this album delivers a pretty tamed form of thrash metal which has not much in common with its originally boisterous character.

Naturally, Defiance were not the only combo that fell victim to its own diluted sounds. But compared with their idols, they had another significant problem: their song-writing skills left wide room for improvement. Or do you really think that a song like the sleepy and boring title track is a hidden gem in the history of thrash? Despite its short double bass parts, it has nothing to do with the songs of those albums that defined the genre. The endless mid-tempo rhythms of the other tracks appeared as the undertakers of thrash as well. The genre had become an old man who was who was relieved that with the second wave of black metal a new phenomenon was preparing to free him from the role of the most extreme guy in town. Unable to write a catchy chorus and punished with the expressionless vocals of the lead singer, Defiance’s destiny was preordained. Not to mention their inexplicable love for stop-and-go riffs that kill the good ideas one finds in “Dead Silence”.

What is the best we can say concerning the A side? Well, the production is okay. Not very powerful, but its transparency and the guitar sound shape a solid foundation. Too bad that the mix is also the best thing we get during the B side. “Inside Looking Out” is not total shit, but its single parts do not form a coherent, exciting track and the somewhat mechanized vocals are simply awful. But lo and behold, the slow-moving but persistent “The Chosen” surprises with a certain amount of atmosphere and its riffing deserves at least a friendly nod of the head. Too late, too little. The horse has already left the barn and the following “Powertrip” with its embarrassing anti-chorus is nothing but a rude awakening. “Beyond Recognition” sounds to me like the work of a band that has lost its orientation or does thing that it is not convinced of. Maybe the whole thing was just an improvised rehearsal session pressed onto vinyl out of a stupid coincidence. Admittedly, there is nothing wrong with the craftsmanship of the instrumentalists, but nevertheless this album is nothing more than an easy-to-understand explanation why thrash metal urgently needed a time-out.